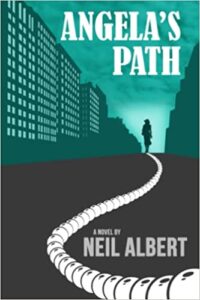 The book is set in the present, in New York City, and Dave Garrett is nowhere in sight. The protagonist is Angela Benedetto, a fortyish businesswoman in equal parts wealthy, successful, and isolated and miserable. After struggles with anorexia and a suicide attempt, she finds herself in the office of the psychoanalyst of last resort, a woman who is not afraid of unconventional therapies.  She recognizes that Angela uses her wealth, especially her clothes, to distance herself from other people.  The first step in her treatment is, “Give me your pearls.”  By the end of the story three years later Angela is transformed beyond anything she could have imagined, and her path has taken her from her condo on the Upper East Side to a neighborhood she barely knew existed.

The book has received several five-star reviews and is available on Kindle as well as in paperback.  (The first two chapters are published in the back of August Hearts)