The Dark Tunnel Part One

BEGIN AT THE BEGINNING:  THE DARK TUNNEL 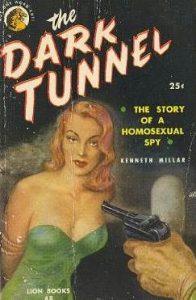 “Everyone has a mass of bad work in him that he will have to work off and get rid of before he can do better and indeed the more lasting a man’s good work, the more sure he is to pass through a time, and perhaps a very long one, in which there seems little hope for him at all.”

To non-writers, the craft of fiction writing may seem magical, and the sheer effort involved in producing a full-length novel commands respect from anyone who has ever tried.  Fiction writing is magical; as John Gardiner observed, a book is a record of the writer’s dream, and reading is the transmission of that dream into a new dream on the part of the reader.  The process if fundamentally mysterious in other ways.  Honest writers will admit that they don’t have control over their own creativity.  Every one of us goes to bed, at times, stuck for what will happen next, and in the morning the solution is there.  You wonder how you missed it; after a night’s sleep it’s obvious.  We go to sleep counting on that mysterious process with as much confidence as we expect the sun to rise in the east; and even if we are never disappointed, we know that both are beyond our control.

To de-mystify this a bit, writing is the same as many other human activities in at least one respect; we start out being bad at it, and with luck and repetition, we get better.  For each of us the learning curve has different slopes, and there are some unfortunates who produce their best work early and spend their lives haunted by their first book. But for most of us, to use the words of Carol Shields, we work through that mass of bad and then get to what is good in us.  It is in that spirit that we approach Macdonald’s early works.

Macdonald produced four novels before The Moving Target (1949) where he created his detective Lew Archer: The Dark Tunnel (1944), Trouble Follows Me (1946), Blue City (1947) and The Three Roads (1948).  None are as good as his later work.  Of the four, only Blue City has been judged to have any literary merit.  Macdonald’s reputation is based on the line of books that begin with The Moving Target.

So why look at the first four?

First, a critic once said that the most we can expect from a first novel is that it is “promising.” The early works give us clues what to look for in the writer’s mature work.  The early books are valuable in that regard; they contain both Macdonald’s darkest obsessions and his most idealistic dreams, not only in the details of the plot, but in his choice of theme.

Second, aside from any questions of quality, the first four are very different from the rest of his work.  After he created Lew Archer, Macdonald still wrote some non-Archer books, but all the stories took place in Southern California and all are recognizably private detective stories, albeit at times involving an amateur sleuth.  The first four are outside the structural confines of the traditional private eye story.

Third, because if we are going to explore his work in full in the format of a blog, there is no reason not to take our time and study them all.  We are free of the space constraints imposed on Jerry Spier, Bernard Schopen, and Michael Kreyling (see my Ross Macdonald Resources page for details).

What do the critics have to say?

Peter Wolfe, in Dreamers Who Live Their Dreams, devotes more time to the early books (34 pages) than any of the other commentators, including ten pages summarizing The Dark Tunnel.  His verdict:

“Tunnel gets his writing career off to a good start.  Though it sacrifices plausibility to the image of its narrator-hero, it both seizes and holds us at a high dramatic pitch.”

“The story hinges on coincidences of colossal proportions, from a confused pattern of sexual imagery, and from the narrator-hero, whose character shifts according to the dictates of the action and the exegetical impulses of the author.”

Schopen’s verdict on the first four novels is, “They are not, however, very good.  Had there been no Archer novels, none of Macdonald’s first four attempts at fiction would justify critical consideration, and none is of interest other than to illustrate how far Macdonald managed to surpass his early efforts.”

Matthew Bruccoli, in Ross Macdonald, described The Dark Tunnel as “an unimpressive performance . . . . Awkwardly plotted, it utilizes crucial coincidence and a clumsy flashback.” But he does note that no less than a critic for the New York Times Book Review called it “a thrilling story told with consummate skill.”

So let’s take a look, shall we?