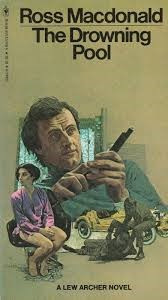 When Archer comes to (an expression I am going to be using many times before we are through) he is in a straitjacket in Melliotes’ clinic.  The doctor is in, along with a nurse, or at least a woman in a nurse’s uniform.  After some tough talk on both sides, Archer is freed from the straitjacket but locked into a large hydrotherapy room, twelve feet high, with a glass skylight.  They torture him with high pressure water jets for a few minutes and then, in the best tradition of villains, leave him alone.

Since the room is completely sealed by a single watertight door, Archer realizes that the only way out is the skylight.  And that the only way to get to the skylight is to float up.  He plugs the drain, turns on all the water jets, and waits for the room to fill.  We never find out if he could have escaped through the skylight because when the room is nearly full the door simply blows open, flooding the building with thousands of gallons of water and knocking Melliotes unconscious.

Archer retrieves his clothes and a gun.  In the course of letting himself out of the building, he hears Mavis.  He retrieves the keys from Melliotes and unlocks the cell where she has been held.  He urges her to go to the airport and fly to Mexico but she wants him to go with her.

Before that can be resolved, Kilbourne shows up.  Archer forces him into the cell where Mavis has been held.  He gives Mavis the gun and tells her to guard him while Archer goes outside to confront Kilbourne’s chauffeur.  It is not clear that Archer knew he was there or why this move is even necessary.  But it doesn’t matter. It should not surprise the reader that by the time Archer has walked outside, Mavis has shot her husband dead.

Mavis offers herself to Archer as a very wealthy widow, saying that if he cooperates with her they can go to Mexico and share all of Kilbourne’s money.  Archer declines.  He advises her to phone the police and turn herself in, pleading self-defense.

Archer meets with Mildred Fleming, the woman whose chatty letter he had seen in Maude Slocum’s desk.  Mildred and Maude were roommates years ago.  She confirms what every reader has suspected, that Maude and Knudson were lovers and that Knudson is Cathy’s biological father.  The new information is that Knudson wanted to marry her when they found out she was pregnant but Knudson had a wife who refused to give him a divorce.

But the Story is Back in Nopal Valley

Archer goes back to Antonio’s and retrieves the ten thousand dollars.  He gives it to Gretchen Keck, the girlfriend of Reavis, telling her, falsely, that Reavis wanted her to have it.  Archer explains that Reavis was not the killer, that he was killed because he had claimed that he was.  He thought he was making ten thousand dollars for a murder he hadn’t committed in the first place.  As he leaves, Archer reflects:

“The money wouldn’t do her any permanent good.  She’d buy a mink coat or a fast car, study bibleand find a man to steal one or wreck the other.  Another Reavis, probably.  Still, it would give her something to remember different from the memories that she had.  She had no souvenirs and I had too many.  I wanted no mementos of Reavis or Kilbourne.”

Archer drives back to the Slocum house and finds James and Francis Marvell sitting on his bed playing chess.  Slocum’s voice is “weak and peevish.” He complains that his daughter has turned against him now and wishes to be with Knudson.  Slocum has realized that Maude hired Archer and accuses Archer of helping Maude to murder Mrs. Slocum.  Archer does not respond; he decides that Slocum has only a tenuous hold on reality and that arguing with him would do no good.  Archer thinks to himself that Slocum must have driven his wife to suicide with accusations that she had killed Mrs. Slocum.

Archer leaves Slocum and Marvell together and seeks out Cathy Slocum.  She admits that she is the one who killed her grandmother and that she tossed Reavis’ chauffeur’s cap into the pool as evidence that he was responsible.  She admits that she also sent the poison pen letter.  She claims to have hated her mother after seeing her and Knudson together and wanted to cause a divorce which would leave her and James Slocum together.  And if her grandmother was dead and James and Maude inherited her money, Maude would want to divorce him anyway.  She claims to have hated her grandmother for how she treated her father.

Archer decides he is not going to do anything with the information.

She knows that Knudson is her father and she is planning to go away with him when he moves back to Chicago.

At this point, with Archer ready to go, Knudson shows up and insists that Archer fight him.  Archer attempts to decline but eventually they have a fistfight on the lawn to the point where Knudson is beaten.

They shake hands and Archer leaves.