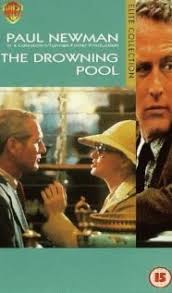 It Has its Good Points

The first third of the book gives us a vivid and convincing portrait of a failed family—an overbearing mother who has destroyed her son, an absent father, a weak and self-deluded son, his frustrated wife, and a child who has grown up to be incapable of love for any of them. It’s a good dramatic situation that deserves a full exploration.

And Then There is the Rest

Schopen and Kreyling both take Macdonald to task for the lack of connection between the two plots of the book, and even an admirer like Wolfe notes the difference in quality between the two distinct stories.

The Drowning Pool lacks any semblance of structural unity.  Macdonald tells one story to a certain point, nearly abandons it for most of the rest of the book, and wrestles the wheel back onto the roadway for the last few pages.  Which is a shame, because he had a good story going.  But, as the commentators noted, he lost his nerve and fell back on pulp fiction clichés to bring the book up to the required length.  This failure is all the more surprising because in The Moving Target he had already shown his ability to write a full-length novel on family-centered themes.

The Structure of the Novel Isn’t The Only Schizophrenic Element

The book is riddled with implausible and unconvincing decisions:

Macdonald was at least as much a man of contractions as the rest of us.  His heart went out to the poor, to racial and ethnic minorities, to all the disadvantaged.  He felt deep and sincere concern for the environment.  He was an advocate for what we now call social justice.

With a couple of blind spots.  One was women, as we have noted.  The other was homosexuality.  In his early and middle books, he seldom misses an opportunity to depict his gay or bisexual male characters as wimpy, effete, and slightly ridiculous.  It’s a jarring note.  And it’s all the more puzzling in The Drowning Pool because Macdonald had recently spent a year in close contact with W. H. Auden, whom Macdonald greatly admired.  I don’t know how Macdonald squared that particular circle in his own mind.  And I don’t know, if Auden read any of Macdonald’s books, what he made of Macdonald’s treatment.

People’s actions sometimes tell us more than their words.  Macdonald claimed to like the book, but I find Kreyling’s observation that Macdonald failed to include The Drowning Pool in any of his omnibus editions more persuasive.

Macdonald made his living by his pen, and he was forced to keep a relentless schedule of production to achieve any semblance of a cash flow.  He did not have the luxury of putting manuscripts aside for months and wait for inspiration.  He went with the ideas he had; and as his talents improve with practice, his ideas will steadily improve.

On to The Way Some People Die.