Chapter Two consists almost entirely of a flashback to six years before, when Branch met his fiancée Ruth Esch.  Since Macdonald’s work is rooted in the concept that the key to understanding the present is an understanding of the past, it is surprising how seldom Macdonald used the flashback device.  Flashbacks, or at least highly detailed recollections of past events, figure into The Three Roads and Blue City, but they are not a major feature of his mature work.  In his later books Macdonald focusses on the process of detection, and flashbacks are a poor fit with that approach, especially when he uses a first person point of view. 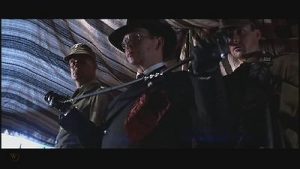 Gestapo interrogation in Raiders of the Lost Ark, the origin of my fear of coat hangers

We Have Ways of Making You Talk

Branch sits down for a cup of coffee with a colleague and speaks for twenty pages without interruption.

Yes, it breaks every rule you learned in creative writing.  But it still works, at least from a structural point of view.  Bruccoli calls it “clumsy,” and I agree to a point.  There is no reason for Branch to speak to his colleague at all, and certainly not at length.  Macdonald is facing the classic narrative dilemma; background facts are necessary to understand the action, but the presentation of the background stops the action.  Later, Macdonald will have the confidence to develop the background gradually; in The Dark Tunnel he opts for the 1944 equivalent of a data dump.

The flashback is a conversation with a fellow professor named Hunter, whose primary role in the book is to provide an ear for what would otherwise be a chapter-long soliloquy.

Just Give Me The Take-Away

Ruth is elegant, tall and slender with red hair and green eyes, but her fundamental quality is that she is mysterious.  Macdonald is a long way from being able to write believable characters, but his inexperience works in his favor here.  His inability to make us see her clearly leaves us uncertain about her, and that uncertainty provides a good part of the energy for the plot.

Branch proposes and asks her to come to America, but in Macdonald’s words, her reply is mocking.  She tells him she has no interest in leaving Germany.  Immediately after their argument is . . .

“I stood up and put out my hands for hers and pulled her to me.  When I kissed her, she kissed me back but the firm body against me did not yield.  There was an integrity of will in her that could not give in, and even in passion she seemed remote, though her lips were soft and opened under my kiss and her hand was cool on the nape of my neck.

Don’t Book a Wedding Venue Quite Yet

Throughout the book she is referred to as his fiancée.  To readers raised in a time of hookups and couples who have several children together before they decide if they are ready for a serious commitment, the term is a little aspirational.  The closest Ruth Esch comes is the following, which takes place a short time after their moment of grand passion described above:

“I love you.  When all this is over, I will go with you if you want me to.  Now there is work to do in Germany.  It will take years.  It may take all my life.”

Fortunately for Branch, the thousand-year Reich that was on everyone’s mind in 1937 was already showing signs of strain by the time the book opens.

Are We Ever Going to Get Out of This Flashback?

When Branch and Ruth are leaving a party comprised mainly of anti-Nazis, their companion, a Jewish doctor is beaten to death.  Branch tries to defend him but sustains an injury to his eye and is knocked unconscious.  Ruth is arrested and disappears.