We were introduced to Doctor Schneider, the head of the German department at Arbana, and the foremost Shakespearian scholar in Germany until he fled the country in 1934.  Macdonald describes Schneider with power and economy:

“He was a huge man with large brown eyes, deepset under a bald dome for which his black beard compensated.  He would have stood about five feet kneeling in prayer, if such a Jupiter ever felt the need of prayer.  His belly, once the pride of the Hofbrauhaus, was a cenotaph to thousands of perished liters of beer.

“’What can I do for you, Dr. Branch?’ He spoke with the slightly exaggerated and aggressive courtesy of many Germans.  His English was better than my German, but it seemed to rumble in his belly and lollop around in this throat.”

OK, so “cenotaph” is over the top, and “monument” would have done the job, but Macdonald worked like a dog for his education.  He’s picked up a lot of arcane words and before the books is over you will read every one of them, often in the form of bizarre speeches set in the mouth of Dr. Branch.

Branch and Schneider have only a distant professional acquaintance, but the moment Schneider learns that Branch knows Ruth Esch, he instantly not only invites Branch to dinner that night but also invites Branch to accompany him when he meets her when she arrives on the nine o’clock train.  Germany is a smaller country that you might think; Schneider himself knew Ruth Esch when she was his student, and Branch suspects that his interest in her is not pedagogical.

After a few pages of preliminaries in which Branch shows little interest in the fact that the love of his life, thought dead, is about to arrive, Branch shows up at Schneider’s magnificent hilltop (a necessary detail) manor.  Branch wonders how Schneider is able to afford it on a professor’s salary.  We learn that Ruth escaped from Germany some time ago and after many months in Algeria and England, she is now in Canada and is about to arrive.  We do not learn why she made no effort to contact Branch.  Apparently stamps were hard to come by.

Before we can ponder this gaping hole in the story too deeply we are introduced to Doctor Schneider’s son Peter, a nasty piece of work complete with a pale complexion, colorless eyes, a disagreeable disposition, and an unconcealed enthusiasm for fascist ideology.  Predictably, Branch and Peter argue whether democracy is better than fascism over dinner.   Less predictably, Macdonald introduces a racial critique of American society.  Peter Schenider argues:

“That merely proves that the state or community can be wrong.” [Branch responds]

Macdonald hated racial prejudice and he will return to this theme again and again.  Macdonald is writing in 1943, long before the integration of the military or Brown v. Board of Education, when America was still a highly segregated society.  As we will see, he makes references to the plight of blacks in many of his later books, and in one, The Ivory Grin, it becomes one of the major themes.  I don’t know exactly how Macdonald’s formative years in tiny Canadian towns sensitized him to the evils of racial prejudice, but God love him for it.

It Gets Weird Quickly 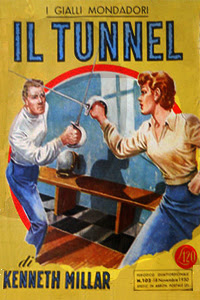 Cover from an Italian edition

After dinner comes a tour of the house which just happens to have a gym set up for fencing.  Of course, Branch used to fence in college and naturally Peter also fences.  Since the best way to work off a heavy meal is with a few minutes of foil work, they are soon at it.  Macdonald fenced in college and his description of foil, epee, and sabre are very accurate.

And then things go sideways.

After their workout with foils, when they have removed their safety masks, Peter tosses Branch a sabre—and not a fencing sabre, a serious cavalry saber with a sharp point, and go to the en garde position.  The contest instantly turns from a harmless athletic competition to something with real danger.  Peter is well verse in handling the sabre and Branch defends himself with increasing desperation.   Branch is only saved from being skewered by a combination of luck and the sudden appearance of a strange woman, which causes Peter to suddenly leave the gym.  In the course of the sabre match, Branch’s glasses are broken, a detail that will become important in the near future.

Doctor Schneider enters; Branch is confused about what just happened and is unsure if it was a real attempt to kill him.  Branch decides that telling the head of the department that his son just may have tried to murder him may not be the best course of action and before he has time to reflect he is bundled into Doctor Schneider’s car for the ride to the train station.  The car’s brakes have been tampered with and Branch barely escapes with his life as the car rolls down the mountain conveniently mentioned a few pages before.

Branch has now been the victim of two murder attempts within a few minutes.  Maybe.  The events have alternate explanations, and more important, they seem to have no motive.  Rather than confront Doctor Schneider, Branch takes a taxi to the train station and arrives just in time for the nine o’clock train.

Ruth Esch is not on board.