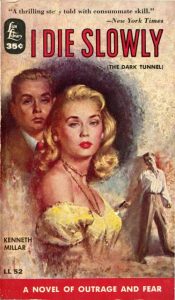 The investigation is usually hard and even dangerous work, and if the story is novel length, the investigation involves a sustained effort over a long period.  Even if our detective is a police officer, he is still a human being and his resources and energy may flag.  This can happen near the end of the story from exhaustion, or it can happen much earlier.

Allowing your detective to have a three AM of the soul is important in humanizing him.  Whatever our work involves, we all have moments of frustration and pessimism.  Those feelings are even more understandable if your job is an investigator and the case seems hopeless.  In my own books, most notably in Cruel April, my detective usually finds himself with long moment of weakness before he finds the thread he needs.  Macdonald gives Branch such a moment, at a point where all he has is questions and no apparent way of approaching the problem:

“I felt a drawing tension in the roof of my mouth and a pressure on the nerves behind my eyes.  I remembered it from childhood, the feeling of wanting to cry.  I sat stupidly with the dead receiver to my ear, wondering if adult infantilism was getting hold of me and looking at the reproduction of the Laughing Cavalier on the wall above my desk.  The Cavalier laughed and laughed, as roguishly as hell.  But it wasn’t the sound of laughter that I heard.”

What Branch hears through the dead phone line is the distant sound of telephone operators on the university switchboard; his conversation with them gives Branch the thread he needs.  Nicely done! 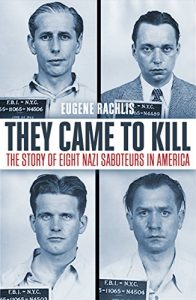 There really were Nazi spies

Outsourcing the Investigation (And Speeding up the Plot)

Very sensibly, Branch decides to track down Ruth Esch.  Whatever she is, she is the only person who may know what is going on who hasn’t actively tried to kill him.  His conversations with a telephone operator lead him to a downtown hotel where she is registered, but Branch can get no further information from the hotel staff.  Not knowing what else to do, he settles into a chair in the hotel lobby.  At which point Macdonald jump starts the investigation.  The hotel detective  appears and strikes up a conversation. Branch concocts a story that he is trailing Esch on a twenty-dollar bet and offers to split the money with the detective.

A few minutes later the detective has talked to the desk clerk, the bellboy, and the switchboard operator and in exchange for ten dollars gives Branch the information he needs. He also warns Branch that he is sure that Esch is gay.  (The 1944 word is “dike,” a spelling I had not seen before.)

This episode is notable for two reasons:

From here, I am going to abandon the chapter-by-chapter analysis, for several reasons.  First, the next few chapters involve the famous chase scene, including the chase through the university steam tunnels, which requires little comment.  Second, we are halfway through the book, and it is becoming increasingly more difficult to avoid plot spoilers.