Ross Macdonald is best remembered for the novels of his mature years that emphasized psychological insight, complicated motives, and intricate plotting; but he also had a gift for writing action scenes, and some of the early Archers, especially The Moving Target, had vivid descriptions of pursuits and physical combats.

His gift is evident here.  Macdonald offers us a sustained chase sequence that covers more than thirty pages.  The most notable part is Branch’s flight through the campus steam tunnels with only the intermittent aid of a flashlight.  In his biography of Macdonald, Tom Nolan relates that Macdonald sneaked into the steam tunnels at the University of Michigan as research, and I am convinced that he did.  Macdonald’s prose is too vivid and detailed to come from his imagination. 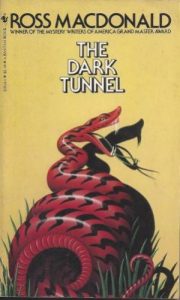 Cover of the Seventies paperback edition

We Need to Talk About Tunnels

Branch is only in the tunnels for about four pages, and then emerges into a gallery of the    natural history museum.  His steps through that door are fraught with symbolic meaning for some commentators:

“His escape from his murderous pursuers takes him down into the hot, clammy steam tunnels which heat the University; this great female symbol scares him as much as his pursuers do.  In the last paragraph, he emerges, thanks to his immersion in danger, from the symbolic birth canal, primed for manhood.”

My initial reaction to reading Wolfe’s analysis was skeptical.  Sometimes a tunnel is just a tunnel.  Reflection has caused me to change my view.

Ross Macdonald’s’ Belief in the Healing Power of Women

This will be one of the shorter entries.

Macdonald had famously terrible relationships with his mother, his wife, his daughter, and a few assorted aunts.  His attitude is reflected in The Dark Tunnel in a startling and gratuitous observation:

“A man will trust another man further than he’ll trust a woman,–women are a different kind of animal.”

And if that was not enough, in the course of his flight across open fields, Branch offers this:

“I couldn’t feel safe from Peter Schneider and Ruth Esch, but they had no way of tracing me here.  If they didn’t have dog’s noses.

Dog and bitch.  A mad dog and a ravening bitch.  I didn’t like to think about Ruth.  The moral insanity of a friend is worse than a friend’s death.”

I can only conclude that Macdonald was consciously employing the tunnel as a female symbol, but that for him, constructive relations with a woman were a matter for his fiction rather than his life experience.  His hero Branch had a better change of finding salvation since Branch was imaginary.

We will encounter Macdonald’s negative attitudes about women and sex through his female characters in every book.  I will state my opinion at the outset; Macdonald was no male supremacist or even  a misogynist; he was a decent man who looked for the good in everyone.  But when sex was involved, his life experiences made him a terrible pessimist.  Only in his last book, The Blue Hammer, does he clearly present the possibility of a positive relationship.

But better late than never.

Most of the academic studies I mention in this blog freely spoil the surprises.  This is not surprising; as one of the works notes, a detailed deconstruction is not possible without considering the work as a whole, including the ending.  But this blog is not for academics; it is for general readers and I wish to respect their right to read the book with pleasure without knowing the specifics of the ending.  Any post that discusses the ending of a book will be prominently marked.

This will be the last post for The Dark Tunnel that does not involve plot spoilers.  I am keeping my descriptions of the action in the middle part of the book as vague as possible, but it is not possible to discuss the book further without spoilers.  Further posts  on the book will be marked accordingly.