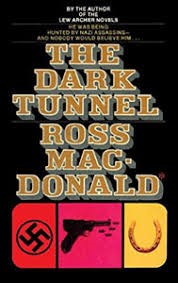 The chase itself finishes at the end of chapter ten in a suspenseful cliffhanger.  It appears that Branch’s luck has run out and Carl Schneider is about to finish him off.  At one level we know that cannot happen—for all his annoying wisecracks, Branch is the first-person narrator and the book has seventy pages to go—but I don’t think anybody puts the book down at that point.

Till now, Branch has been acting on his own; in the last four chapters of the book he is still the center of the action, but as an instrument of the FBI.  From a plotting standpoint, this is a sensible move.  A nearsighted college professor squaring off against a Nazi spy ring was always a stretch; when it is time to take them down, Macdonald wisely decides to let the federal government do its job.

A lot happens in the last chapters and I will summarize how the story develops:

I don’t remember when I read The Dark Tunnel for the first time, but it was certainly many years before I started writing mysteries myself.  In rereading the ending for this blog, I realize I unconsciously borrowed (or stole, depending on your point of view) Macdonald’s nurse-as-killer idea for an episode in Cruel April.    In my story the patient is taken by surprise; in The Dark Tunnel the patient is laying in wait.  But there was something about the visit from a nurse as menacing rather than comforting that stuck in my memory.  I’m sure Macdonald borrowed the idea himself from somewhere else, but I’d like to acknowledge yet another debt to him.

The last two posts will discuss the book as a whole and then we are ready to move on to Trouble Follows Me.