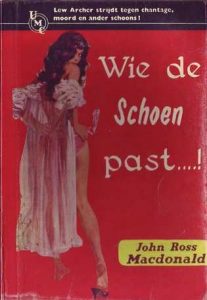 The final chapter covers three disparate events and places. As we have seen, it starts with a search of the Dalling house for evidence of Tarantine’s murder. It then shifts scene (and mood) for the last meeting of Archer and his client Marjorie Fellows.

The last part of the chapter, and the end of the book, takes place where it all began, in the sitting room of Mrs. Lawrence’s tourist hotel in Santa Monica.

The mood is grim. When Archer arrives the police have been and gone, so Archer is spared the necessity of telling Mrs. Lawrence that Galley is in jail for three murders.

It helps, in a way, that Mrs. Lawrence is in a bland denial of everything. “My daughter is perfectly innocent,” of course,” she explains to a disbelieving Archer. Her denial is even more remarkable because the charges involve three separate murders. Even if the police are batting .333, there is a conviction in her future.

The closest thing we get to insight into Galley’s childhood is her mother’s ridiculous blathering about how people were always jealous of Galley and spread false rumors about her. We get the impression that however Galley came to misbehave, there were no consequences at home. When Archer asks, Mrs. Lawrence refuses to be specific:

“’I learned many years ago to close my ears to the base lying chatter of the world.’ Her mouth was like iron.”

Archer does his best to penetrate her defenses but they have been in place too long to be shaken by any inconvenient facts. When Mrs. Lawrence admits that she has nothing other than the house to pay for Galley’s legal bills, Archer gives her the $500 he received from Dowser for finding Galley in the first place.

Moved by Archer’s generosity, she takes him into her confidence. When Galley stayed overnight she left a package and swore her mother to secrecy. Now Mrs. Lawrence produces it. Inside is the $30,000 that Speed swindled from Marjorie Fellows.

An odd and unsatisfactory conversation ensues:

The conversation about the package shows intellectual dishonesty on the part of Mrs. Lawrence.  She knew the package was there before her talk with Archer turned to the question of how Galley’s legal bills would be paid. When he raises the subject, she suddenly brings out the parcel. This is not a coincidence. If Mrs. Lawrence thought the package contained Galley’s laundry, she would not have produced it at that juncture. She may be crazy but she is not stupid. She suspected that the parcel was either money or drugs, even if she would never admit it, even to herself.