ON THE WHOLE, I PREFER HAWAII

Macdonald hasn’t figured how to write a memorable opening sentence for a book, but he nails the opening of Part II, where we are magically transported from the trade winds and gentle surf of Oahu to the ghettoes of wintertime Detroit.

Part II is the shortest subpart, comprising only two chapters (four and five) in 24 pages.  But it’s the moral axis on which the entire work depends.  Macdonald takes us on a sympathetic guided tour of the miserable lives of the inner-city residents.  The tour is not essential to the plot, but it’s essential to Macdonald’s larger aim of forcing his white readers to consider what the lives of others are like.  And he will not let them forget that they are sacrificing for the war as well:

“. . . I took a cab to the black town, then walked through the bleak streets of slum houses, every second one of which had a service star in the window . . .”

Macdonald’s asides will get much better, but he is already showing promise. Here is the narrator speaking about his married friend Eric Swann, who was having an affair with Sue Sholto, the murder victim:

“I doubted Eric’s ability to shift with a perfect ease from a dead mistress to a living wife.  On the other hand, Helen Swann’s tremulous and brooding love needed very little to feed on.  Which is why, I thought, her husband had been unfaithful to her.” 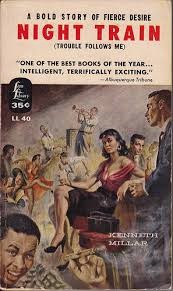 A lot happens in Chapter Four:

And even more happens in Chapter Five:

Drake has a long conversation with an FBI agent who hears him out at length and who reveals that the Bureau is actively investigating Black Israel in general and Hector Land in particular.  The FBI is also actively looking into the possible connection between Sue Sholto’s death in Hawaii and Hector Land. (We should note that the doctor in Hawaii only said that her death was not part of a sex crime, not that Land couldn’t have killed her.)  Except inside the slightly skewed world of this book, that should have been the end of the matter for Drake.  He’s brought that matter to the attention of the government professionals, even at personal risk.

But what the hell, he’s going to play detective on his own . . .