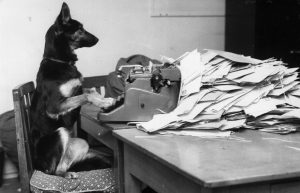 The economics of writing are different

As a lawyer, my income depended on my ability to generate billable hours.  If I didn’t work, there was nothing to bill. It’s a concept familiar to anyone who is paid by the hour.

Then I published a book, for which I received a small advance.

The book sold well and I found myself receiving royalty checks.  They were neither large nor frequent, but they had nothing to do with any further effort on my part.  It was the book, not me, that made the money.

Then the paperback rights sold.  Another check came in.

The book was optioned for a movie.  Another check.  I had done nothing; it wouldn’t have matter if I had died.  It was a revelation.  I had found a way to make money with no additional effort.

I was not displeased.

Trouble Follows Me was Macdonald’s second novel, and his wife had already been published multiple times.  His letters to his wife show his frank interest in commercial success. As Macdonald matured, he became increasingly sensitive to concerns that his material would appear dated.  He refused to use criminal slang for fear it would be outdated.  As a professional writer, he was wise to think about the long term.

It is ironic, then, that he chose as the centerpiece of his book an extended trip on a method of conveyance that was already in its twilight.

There was no way anyone in 1945 could have anticipated that within a few years, automobiles and airplanes would displace long distance passenger trains.  But that indeed came to pass.  We may commute by train, or use one for a tourist excursion, but in the twenty-first century, long distance train travel is a quaint notion. And stories featuring the setting are dated indeed. 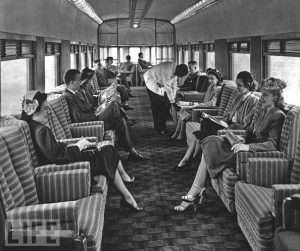 It Seemed Like a Good Idea at the Time

Trains were heavily used as settings in detective stories in the Twenties and Thirties both in print and on film.  I will assume that anyone reading this blog is familiar with Strangers on a Train and Murder on the Orient Express, to give just the two most obvious examples.  A train is a good backdrop; no one arrives or leaves, the characters are in a defined space; the compartments provide opportunities for all sort of unseen acts; and that gentle rocking motion imparts a sensuous air to the proceedings.

This particular run of the Grand Canyon Limited staggers under multiple burdens.  By the end of Part III, Macdonald will:

Macdonald shows a surprising virtuosity in his character sketches.  Drake’s fellow passengers are sharply drawn and he has genuinely witty comments about each:

Is Sex All You Think About?

The relationship between Drake and Mary Thompson has been confusing since the start of the book.  They date, they approach, and retreat for inexplicable reasons.  Partly this is plot driven, but that is being charitable.  Macdonald had almost no experience with positive romantic relationships with women, and his attempts to depict them amount to little more than clever guesses of what it must be like.  There is also the problem of understanding the mores of the Forties from the point of view of a society that invented “hookup” and “friends with benefits.” (Although it is my clear understanding that life in wartime brought out the frisky side of many of the people involved.) But eventually she invites Drake to her bed.  Even allowing for the standards of the time, their encounter is opaque, which will make later mention of his desire to marry her unexpected, if not unconvincing.

“I hated the cause of those ugly deaths as intensely as I would have if Hatcher had been my brother, and the Jewish girl and the Negro woman my sisters.”