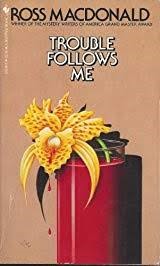 THE BEGINNING OF THE END

Part III, Transcontinental, ends with the arrival of the train in Los Angeles.  Drake leaves Mary Thompson to continue to San Diego alone, a move that surprises her as much as the reader.  He explains he is going to Santa Barbara to chase down a letter mailed by Private Rodney Hatcher before Hatcher’s death.

Their parting is presented summarily in less than a page.  Given that Thompson is up to her ears in the spy ring, and that she knows the trip to Santa Barbara could potentially expose it, her minimal objection is a lost dramatic opportunity. In the logic of the book, it’s a mistake.  She stuck close to Drake on the train (my euphemism for sleeping with him) to distract him from letting Drake see Anderson, her husband, get off the train.  Now she doesn’t even offer to come along.  If she did, she might have some control over the situation.  Letting him go was not only a bad decision on her part; it was a lost opportunity on Macdonald’s part to plant some suspicion about why she would want to come along, even if Drake would have declined.

Part IV: The End of the Ride

The last section starts with Chapter 11, which moves the plot along in an efficient and exciting manner.  Macdonald gives us a well-presented scene with a minor character whose job is merely to be the addressee of the letter that Rodney Hatcher mailed.   The letter reveals that “Anderson” is someone with a shady past that Hatcher met in Shanghai years before. We also learn:

The mature Macdonald was known for thoughtful books that depended on meticulously constructed dialogue, poetic imagery, and intricate plots.  In his earlier books he shows a flair for the more mundane talent of vivid action sequences—car chases, fights in bordellos, fisticuffs, and gunplay.  The last seventy pages rip along until the final section, set in a remote ranch house across the border, where we get the big reveal that, in the opinion of most commentators including myself, ruins the book.

The plot developments of the final two chapters:

So What Did You Think of the Ending?

“Another mismanaged character is Mary . . .. The only clue to her villainy comes from her author’s angry sexual Puritanism.  Sex is the giveaway.  Aboard the Grand Canyon Limited, she invites Drake into her bed.  Her rutting invitation gainsays not only restraint but also proper womanly submissiveness.  To poison our hearts against her, Ross Macdonald piles on the sexual misdeeds . . . The moral inference is clear.  No decent girl would ask a man to her bed . . . The writer’s powers of observation excel in his second novel, but his dramatic motivation falls short.”

After quoting from a passage near the end where Drake observes that Mary’s ego stood between her and the world “like a distorting lens,” Schopen writes:

“What is distorted here is the narrative, for the reader, who has lived with Mary for nearly two hundred pages, cannot see her as evil or depraved either. Nary a hint or gesture has suggested that she is perhaps not the woman she seems, so the reversal strikes us as extrinsic to the action, reversal for reversal’s sake.”