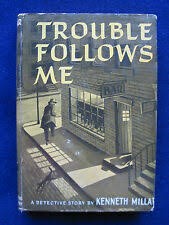 What’s Good About it?

What’s Bad About it?

The Book is a First Draft that Needed Work

Trouble Follows Me was written, not only in difficult physical circumstances, but under time constraints.  For reasons that had nothing to do with artistic choice, he wanted to get the manuscript to a publisher as rapidly as possible, without having the time or opportunity for revision.

—   At the front end, Macdonald could have given some clues so that we are not completely caught flat-footed by the reveal.

—    At the back end, why does her motivation have to be, that since I’m a woman who has sex outside of marriage I might as well commit espionage and murder while I’m at it?

—    A mature Macdonald would have created a sympathetic backstory of how she was being blackmailed, how she was a true believer in Black Israel, how her first husband, a black man, had been lynched . . . a motivation could have been provided.  Macdonald  did this in The Dark Tunnel by having Doctor Schneider do evil things because of blackmail.  It’s interesting that Macdonald didn’t think of that when he had a female character.

My next post will be some general observations on the art of revision from the point of view of a working writer.