NEXT STOP, THE TOWN WITH NO NAME 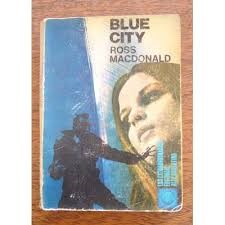 “All great literature is one of two stories; a man goes on a journey or a stranger comes to town.”

Macdonald has figured out how to write an opening

Blue City is a story of exile and return.  As the story opens, our hero Johnny Weather, is returning to his hometown.  Macdonald opens with Weather on the last lag of his journey, a hitchhiker on a commercial truck.   It’s a good choice.  As the town rolls by Macdonald can describe the suburbs and then the city itself, including the factories that make the spring night smell like an armpit. (It will be a while before Macdonald truly warms to his subject of the truly disgusting nature of the town, but it’s a good start.)

The opening few pages also give us a conversation with the truck driver where we learn that Weather is unmarried, has been recently discharged from the army, and that he has been away for ten years—meaning he left when he was only twelve.

“I hadn’t had a fight for a long time, and I was spoiling for one.”

On page three, Macdonald gives us an early warning of what kind of protagonist he has created this time.  Weather is no college professor, as in The Dark Tunnel, nor a commissioned naval officer, as in Trouble Follows Me.  By page eight, Weather has his wish.  At his first stop after being dropped off by the truck driver, he goes into a bar, talks to an old man, and then finds his drinking companion being mugged by a couple of toughs.  He beats them unconscious. For good measure, he insults the bartender and leaves.

Somebody always doesn’t get the memo

Before the fight, Weather learns from the old man that his father, the wealthiest and most powerful man in town, had been murdered two years before; the timing of the disclosure keeps Weather (and us) from learning any details at that point—a nice move in building suspense.

In the next chapter, Weather learns that he has a stepmother; his father had remarried a few months before his own death.  Weather next makes a call on Alonzo Sanford, the owner of the armpit-smell-producing rubber factory and much else in town, including some real estate he purchased from Weather’s stepmother.

Weather learns from Sanford that the investigation into his father’s murder stalled, and gives him the name of Inspector Ralph Hanson, the detective who handled the case.  Hanson takes Weather into his confidence on the circumstances of the shooting (the victim was shot while walking on the sidewalk from someone in a vacant second story office) and, more importantly, tells him that his father was involved in bringing illegal gambling to the town twenty years before.  This was the origin of the corruption in the present police department.

If not supper at Elsinore, at least a quick drink

In chapter four, the Hamlet elements begin to become apparent as Weather meets his stepmother, the Gertrude figure, for the first time.  Such a meeting is bound to be awkward, but this one is memorable.

Pawnbroker to the proletariat

Blue City shows a tempo that Macdonald will observe throughout his career.  The action does not stop.  In one evening Weather has gone from interviewing Sanford, to Hanson, to Floraine, and he is not done yet.

His next stop is Kauffman (no first name, unless it’s “the second hand dealer”), based on information from Hanson that the gun that shot his father came from the pawnshop.  The gun was stolen, perhaps conveniently, a couple of days before the shooting.

Kauffman is an engaging if overwritten character, a grumpy old leftist. Weather and Kauffman have a long discussion about the economics of crime and corruption that outlines the social and political agenda of the book.  Kauffman is the Polonius figure, for those of you who are keeping track.

After Kauffman comes to trust Weather, he provides useful information:

At the end of their conversation, Weather leaves without insulting him.