MEETING THE FRIENDLY FOLKS IN THE TOWN WITH NO NAME 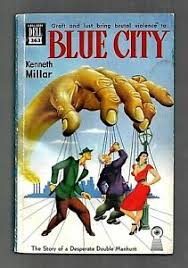 “The form of the private eye novel is simply the belief in the hero.”

Macdonald never let his background in literature get in the way of the crisp, efficient telling of his story.  Readers of mysteries identify with the detective. If the case is important to us, we expect it to be just as important to our detective.  Macdonald delivers that sense of importance by ceaselessly moving the investigation along.  Whether his investigator is Lew Archer or just an amateur, being a sleuth in a Ross Macdonald novel is a 24 hour a day job.

What kind of job is this for a nice Jewish girl?

Flushed with failure, Weather next heads to the Cathay Club to track down Kersch.  It’s a long shot because Kersch has no obvious relationship to the homicide Weather is investigating.  No matter. In one of the few wild coincidences in the book, Weather meets Carla, a prostitute who just happens to be the granddaughter of Kauffman the pawnbroker.   If you are following the Hamlet analogy, Carla is the Ophelia character. They banter; she tells him more about Kersch and speculates that Kersch has something on his erstwhile employer, Floraine, Weather’s stepmother.  And then she takes him upstairs.

In the upstairs bedroom, before they have sex, she and Weather have a long conversation about self-worth and the degrading economics of sex work that oddly echos the conversation Weather had a few hours before with her grandfather.  Several commentators state that Weather brings her to climax but to me the textual evidence is thin.  Those pesky censors. It’s a collateral matter and I will give Macdonald the benefit of the doubt.

The importance of the interaction is the information Carla gives Weather about Kerch, which is going to drive the rest of the novel.  For our Hamlet fans, Kersch is our Cladius.

Weather wanders downstairs.  In a homage to his father who brought the slots to town, he plays a machine.  Then he is directed to Kersch’s office.  From there, things happen fast: