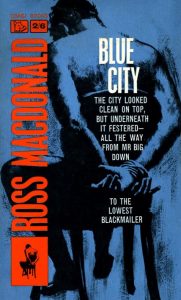 WALKING BACK INTO THE SUBURBS OF HELL

The title of this post is taken from the last line of chapter nine. Weather has been driven to the edge of town, beaten unconscious and dumped into a ditch by Moffat, a corrupt cop.  We he comes to, he finds that Moffat robbed him as well.

Without histrionics, Weather dusts himself off and starts walking straight back into town.

It’s a powerful, understated moment that reveals Weather’s determination at one of his lowest moments in the book.  And a few lines later, when Weather catches a bus, Macdonald trashes the atmosphere with the following gratuitous exchange when questioned by a fellow-passenger:

“Say, haven’t I seen you somewhere before?”

“Never,” I said. “I just arrived from South Africa where my father owns the Kimberley Diamond Mines.  His name, curiously enough, is Jan Christian Smuts.”

An aside on wisecracking in early Macdonald

We all learn by imitation, even artists.  Despite their later falling out, Macdonald always admired Chandler’s style.  Macdonald’s attitude toward Hammett went beyond admiration—Blue City is a love letter to the Hammett of Red Harvest.   The senior writers both allowed their respective detectives wry observations and even wisecracks, especially in the presence of the police.  Such language has its place:

The wisecrack has so many uses that it quickly became a trope in hard-boiled writing, with some writers wielding the tool better than others.  In his mature books Archer can wisecrack with the best of them.  Lew Archer seldom reaches the easy patter of Sam Spade, or Marlowe at his best, but Archer brings an appropriate level of dry, ironic humor to the table.

In the early books, Macdonald is still learning, and his ridiculous overuse of wisecracks is a clear weakness in his writing.  Macdonald’s early works are novels without restraint.  He seldom knows when to temper his language, and the wisecracks are where his lack of control is most obvious.  But trust me, soon enough he will get much better.

I’ve been beaten unconscious, kidnapped, robbed, and threatened with death.  I’m starting to get annoyed

Weather would never say this, of course; he was annoyed when he stepped out of the truck on page two.  Rage is his default state. But the events of the evening have focused him.  His next stop is the home of the city’s mayor, Freeman Allison, a reform candidate who has been unable to reform anything.  It’s something of a long shot, showing up at the home of a stranger at two in the morning, but after Weather discloses his identity, it’s a productive meeting:

While Weather waits for Allison’s return, Macdonald gives us a hint of his talent:

“The night had passed its three o’clock crisis, and the patch of earth where the city stood was turning now not away from evening but towards morning.  An hour before, I  had felt almost finished, beaten down and about ready to quit.  Since then a tide had turned in my blood; My head was light and sore, but I felt ready to right the city again.  I waited for Allison impatiently.  I wanted to be on my way.”

Fish and chips and heroin

Weather stops into a late-night greasy spoon for a meal, and as he eats, Sault walks in to pick up a briefcase.  This ought to feel like an unbelievable coincidence but it doesn’t.  Weather slips out after him and soon realizes that the briefcase contains heroin and that Sault is making the rounds of the prostitutes that constitute his clientele.  Once you accept the idea that Sault does his business within easy earshot of a bystander like Weather, it’s a grim and depressing series of encounters, vividly executed.

The chapter ends with Weather watching as Sault enters his step-mother’s house at four in the morning.