BLENDED FAMILIES CAN BE AWKWARD 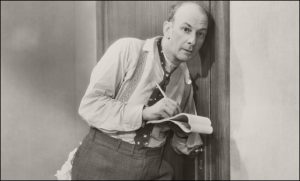 Once Johnny Weather slips into his stepmother’s house, Macdonald deploys a device he will never tire of—the overheard conversation.  If you are bothered by the unusually sharp ears and convenient location of the detective, or by the fact that the suspects are always discussing the crucial events of the conspiracy rather than what’s on Netflix, you should stop any plans you ever have to read Ross Macdonald because he will drive you nuts.  Macdonald had some short stories that do not include eavesdropping, but if he wrote an entire novel without at least one instance, I can’t recall.

You may ask why this unrealistic plot device doesn’t bother me unduly:

Meanwhile, back in the living room . . .

Taking the show on the road

See that cloud of dust? The cavalry is on the way

Weather returns to the gas station where he received directions.  Remarkably, it is open at five in the morning. He telephones a contact of the Mayor and asks for help.  Rather than wait for the police, he returns to the scene himself.

Weather finds Rusty digging a grave behind the house and knocks him unconscious.  He charges the house but winds up firing seven rounds at shadows.  Garland, who is feeling very lucky indeed, decides to risk his life on the assumption that Weather’s gun is empty, and is correct.  He shoots Weather’s gun out of his hand and marches Weather inside.  Sault is dead and Floraine is bleeding badly, barely alive.

Garland forces Weather to drag Rusty’s unconscious body inside and announces that they are waiting for Kersch to return with a doctor to treat Floraine.

That cloud of dust?  More Indians

Weather is forced to finish digging Sault’s grave.  Kersch returns, also with a sort-of doctor who tends to Floraine as best he can.  She dies anyway and Sault is buried.  Kersch takes a button and some hairs from Weather, intending to frame him for Floraine’s death.  He and the doctor leave with the evidence and Floraine’s body.