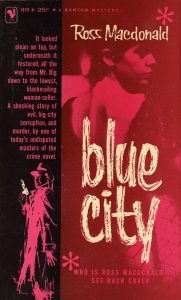 HOLD ONTO YOUR HATS!

I lied to you in Part Five

Most suspense writers like to end a chapter with their protagonists in a predicament, leaving the escape/reversal to the next chapter.  My last post suggested that we had come to the end of chapter fourteen. But that was my stopping point, not Macdonald’s.  He describes Weather’s escape before the end of the chapter.  I am not sure why and I can see no advantage in not following tradition. Macdonald was left with no better way to start chapter fifteen than to have Weather think about how much gas is in his car.

And now for a homophobic assault

The reversal, the last two pages of chapter fourteen, has Weather in the kitchen, presumably sitting on the floor, guarded by Garland.  Although there were ropes in the kitchen that had been used to bind Sault during Sault’s torture-murder, it did not occur to anyone to tie Weather.  This is doubly odd because keeping control of Weather is crucial to Kersch’s plan to avoid responsibility for Floraine’s death by framing Weather.

Weather waits and sizes up his chances.  He acknowledges that Garland is an expert shot. We know that Garland was not only smart enough to count Weather’s shots, but also brave enough to take the chance to face Weather down before he could reload.  Nevertheless, Weather’s opinion is that Garland “wasn’t that much of a man.”

Weather charges Garland, who gets off two rounds at Weather but misses.  Weather overpowers him.  When Garland is unconscious, he deliberately snaps each of Garland’s “slender” wrists.  Maybe it’s a calculated move to keep Garland from using his talents with a gun.  I take it as a play on the stereotypical “limp-wristed” prejudice and I am not comfortable with it.

Macdonald was a man with a great heart and a serious and lifelong social conscience, but anything having to do with sexuality revealed some serious limitations.

We expect Weather to chase after Kersch but instead he goes to the house of the leading businessman in town, Sanford.  This decision shows that Weather understands where the power is.  Sanford doesn’t dirty his hands, but his empire is based on the work of people who do.  Sandford is taken aback by the intrusion and is at a disadvantage in being alone except for the maid.  A combination of conversations with the maid and Sandford himself gives Weather the following details:

It seemed like a good idea at the time

I like that Macdonald had Weather visit Sanford first, but for reasons that will be clear in a moment, that visit came at a cost.  Before Kersch visited Sanford, he’d dropped off Floraine’s body at the house, and all the time that Weather has been talking to Sanford, the clock has been ticking.

After leaving Sanford, Weather’s next stop is his former home. As he suspects, Floraine’s body has been dumped on the floor.  Weather searches the body and retrieves the knife, button and strands of hair deposited by Kersch.  But his luck has run out.  As he is leaning over the body the housekeeper shows up and draws the obvious, although wrong, conclusion.

The alarm is raised and Weather is now on the run.

In nearly all his books, Macdonald’s protagonist, whether Lew Archer or someone else, is cast as the pursuer.  Occasinally,Archer will need to take cover or evade for a bit, but Macdonald’s protagonists are hunters, not hunted.  This is a shame because Macdonald had a talent for writing pursuit scenes from the point of view of the quarry.  The pursuit in The Dark Tunnel is the best thing about the book and stands up, as a single episode, well against his mature work.  The pursuit scene in Blue City, depending how you want to count it, covers thirty pages of brilliant, suspenseful action.  All the police and half the town are after him. Weather escapes repeatedly from what appear to be hopeless situations.  The episode even has moments of humor, a talent that Macdonald displays very rarely.  The chase is so good I’m not going to spoil it by summarizing it here.  But as the chase winds down, I have to note some important plot developments: