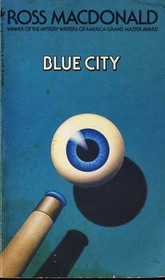 “I coulda been a contender.”

Blue City is not a good book.  It’s promising, and it shows flashes of talent in the plotting and pace.  But, for all its strengths, the book is an artistic failure.  The commentators vary a bit in their assessments, but when they look to what is fundamentally wrong with the book, they are in agreement—the overwritten character of Johnny Weather.  As the name suggests, he is a force, not a person in whom we can have any personal investment.  As readers, we are spectators watching how he will overcome the obstacles rather than participants who worry about him as a person.

The same thing that went wrong with Trouble Follows Me—insufficient time for reworking the initial manuscript.  Nolan reports that Macdonald wrote Blue City in one month.  It can be done; I produced the first draft of my first novel in fifteen working days.  But the most that a novelist can hope for in so short a time is a first draft, not something ready for publication.  And at the same time, as Schopen points out, he was working on The Three Roads, a book that was so different that working on both projects must have been a distraction.

Could the book have been a lot better?

“Being a Jew he had hope.  And with hope comes the irresistible desire to meddle.”

The book needed a rewrite similar in nature to the one I suggested for Trouble Follows Me; except Blue City needs a rewrite of the protagonist, not the murderer.  Johnny Weather needs humanity, subtlety, and nuance.  He needs to be toned down.  Most of all, we need motivation.  Aside from an abstract search for justice, we follow his struggles for 230 pages without an insight into why this is so important to him, or the circumstances that have brought him to this point.  Weather had no love for his father and certainly no love for the town.  The explanation presented at the start, that he was looking for a job, is hardly compelling.  We don’t believe him but we don’t know what else to believe.

I agree with the suggestion of Spier that the book is overwritten in another respect.  Spier notes that Macdonald is moving from the impersonal evil of governments and historical forces to evil on a more personal level.  Macdonald’s bad characters are drawn without any subtlety.  The story would have benefitted with villains of dark gray rather than pitch black.  This is an interesting omission.  Blue City points out repeatedly how good people have been warped and degraded by their personal and economic circumstances.  But his bad characters are just bad, through and though.  With the possible exception of Allister, nothing made them that way.  This is a mark of the immature Macdonald.  By the time he has a few more books under his belt, he will be creating believable characters who span the whole spectrum of the human condition.  You are not going to like many of them, but you will accept them.

Now we are ready for The Three Roads, the last of the pre-Archer books and perhaps the most puzzling book he ever completed.