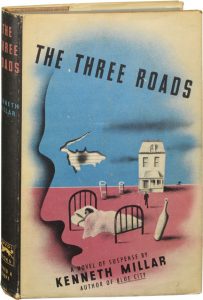 YOU CAN’T GET THERE FROM HERE

The Three Roads is probably the most bewildering, complicated, ambitious novel Macdonald ever completed.  Essentially, it attempted to use the myth of Oedipus as the basis for a contemporary mystery. It was an audacious experiment for a relatively inexperienced writer working against a deadline, both in terms of structure and theme.  More so than the first three books, it gives us an in-depth look at the themes that will dominate his mature work.

Before I can even relate what commentators have said, this book requires a preliminary blog post.

Macdonald had recently been discharged from the Navy and had joined his wife, Margaret Millar and their daughter in Santa Barbara, which would become their home for the rest of their lives.

THE BOOK IS A HOT MESS

There, I’ve said it.

As we will see in my next post, the academicians differ sharply about the book.  But the main disagreement is what is wrong with it.

DON’T LET THAT STOP YOU

The Three Roads, for all its flaws, is important in tracing his development—more so than the three the preceded it.  This is his first step towards the tricky business of character-driven fiction.  And he takes on the added burden of fitting his story within the tangled plot of the Oedipus story.  The fact that he succeeds imperfectly doesn’t mean that it doesn’t deserve examination. As Pauline Kael said of the movie, New York, New York, this book is “an honest failure.”

So, armed with some background, let’s move on to the scholarly response.