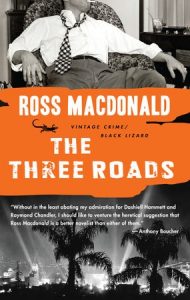 WHAT DO THE CRITICS SAY?

“ . . . the novel as a whole is confused by the author’s inability to distinguish and maintain distance between narrator and character.  The consequence is fictional disaster.”

Bernard Schopen calls it “an ambitious work, it perhaps seems a more egregious failure than it really is, but it succeeds only in demonstrating the seriousness of the technical problems Macdonald had been unable to overcome and his inability to transform into realized art material about which he felt strongly.”

Schopen notes that, for all the talk of psychological theory, “The subject of The Three Roads is love, specifically sexual love.” I will return to his point at the end of my comments on this book.  After several pages of reviewing numerous overwritten passages, Schopen concludes his summary with, “It is difficult to determine what to make of all this.” Harsh, perhaps, but not completely unjustified.

“An anomaly, it is not a novel of character or of place; its incidents are contrived and its motivation, stiffly formalized.  The Oedipal paradigm, rather than energizing the action, flattens it into case study.”

Peter Wolfe, in Dreamers Who Live Their Dreams, analyzes the book at length, and his critique is too complex to be summarized here.  His fundamental reaction to the book is that none of the characters have the motivation to perform what that plot demands of them.  He gives Macdonald credit for the shifting narrative focus, calling it “shrewd literary judgment.”  I will point out several instances of this in later posts. His final verdict is that although the book is an “artistic regression,” it shows “new strengths.”  I agree with his “case study” comment, not so much because of the action itself, but because Macdonald brings the action to a halt several times just to trot in a psychiatrist to act as a sort of medical Greek chorus.

“. . .  The Three Roads was a false start [which] has a limited omniscient point of view that is too limiting.”

Matthew Bruccoli has little to say about the book, and almost none of it good.  He points out, along with several other commentators, that the book labors under the impossible burden of trying to be both a mystery and a thriller.  The former requires the gradual release of information in the course of the investigation.  The latter demands the withholding of information to build suspense.  The book falls awkwardly between two stools, being more satisfying as a thriller than as a mystery.

Kreyling, in The Novels of Ross Macdonald, summarizes the plot in exactly two paragraphs to and makes no evaluative statements whatsoever.  I have no explanation why he was so disinterested.  Immediately after his non-discussion of The Three Roads, he spends three times as much space on Macdonald’s next project, Winter Solstice, a manuscript which was never submitted for publication.

“The lessons of this novel are manifold . . . The ending is one of Ross Macdonald’s most positive.”

Jerry Spier avoids any structural analysis of the book.  He prefers to focus on how the themes of the complexity of guilt and the cyclical nature of events, which become the core of Macdonald’s later plots, are fully employed here for the first time.  Spier notes the importance of The Three Roads but does not go as far as to call it a good book.  To that extent the commentators are all in agreement.  His characterization of the ending is baffling unless he means that very narrowly; we will discuss this at the proper time.

“An astonishing stride beyond Blue City.”

“[It] suffers from overmuch psychiatry.”

“[The author should have chosen] the Hitchcock fork rather than the Jungian curve.”

Alfred Knopf himself was so taken with it that, even though he demanded a heavy rewrite, he thought Macdonald should abandon mysteries and concentrate on thrillers.  We can all be thankful that Macdonald ignored him.