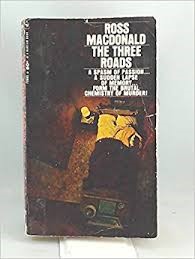 SETTING UP THE ACTION

The book is divided into four sections; Saturday, Sunday, Monday, and (portentously) Doomsday, which section takes up the last half.  Reportedly, the ten thousand word cut demanded by his publisher came primarily from the first section.

The opening chapter is a conversation between Paula West and Bret Taylor during her visit at the naval hospital.  Bret’s memory is a mess.  Although he has some recognition that Paula is not a stranger, he does not remember her name and he is confused when she tells him they are not married.  They both sense that he is making progress and that his memories may soon start returning.

The scene shifts to a conversation between Bret’s lecherous psychiatrist Commander Wright, and Paula.  In between fending off Wright’s repeated advances, Paula learns Wright’s theory that Bret’s amnesia was triggered by the double impact of his ship being sunk and then returning home in 1945 to find his wife, Lorraine, dead. Paula and Bret had been on the verge of marriage when he was on leave in 1944; Paula relates that he’d started a fight about how she made so much more money than he did. She recognizes that their economic inequality was his pretext and blames herself for rushing their relationship.

Paula reveals to the psychiatrist that after Bret married Lorraine, Paula went to see her at the house Bret had bought for himself and Paula.  Paula’s snobbery, as well as her jealousy of the woman ten years younger who won Bret when she had failed, is very much in evidence.  Despite her youth, Lorraine knew how to take the sexual initiative with Bret, at least when alcohol could help the process along.  Paula dismisses her as a “featherbrain” and worse.  Although, as Paula admits, she is hardly unbiased.

Paula reveals that she was with Bret the night in 1945 when the two of them found Lorraine’s body.

This chapter has no dramatic action.  It takes place on the train carrying Paula back to LA from the hospital in San Diego.  She reflects on her past, particularly about how she came to meet Brett at a party in 1943 and the course of their romance.

We are introduced to Theodore Klifter, a European refugee from the Nazis who practices psychoanalysis.  Paula is interviewing him, hopeful that he will take an interest in Bret’s case.  We learn that when Bret arrived home in 1945 and went to Lorraine’s house, Lorraine wasn’t home.  Bret called Paula.  She drove to Lorraine’s neighborhood, met Bret, and the two of them took a drive while they waited for Lorraine to return.  When Paula drove him back to the house later in the evening, the two of them found Lorraine dead, naked, strangled in the bed.  When the doctor asks if Brent’s amnesia could be a defense against the memory that Bret killed his own wife, Paula flatly denies that this could be possible.

After hearing the story of her relationship with Brett, Klifter asks her if she is a masochist.  She says no.  I think she is correct; a true masochist at least gets sexual pleasure from being abused and ignored.

Paula produces a sheaf of newspaper clippings about the killing, written in a style no self-respecting high school paper would have printed.  Despite the melodramatic prose, the clippings indicate that another man had been at the murder scene shortly before.

This is much like Chapter Three, a segment solely about the reflections of the narrator, but this time it’s Bret instead of Paula.  Bret displays himself as perhaps the most morose character in American fiction.  He has frequent and vivid memories of seeing his mother dead twenty-five years before.  When he is not remembering himself as a four-year-old, he thinks about his failure to respond to Paula as the man she so clearly desires.  The poor man has trouble differentiating between the mother he barely knew and the real woman here in the present.

Bret awakens in his hospital bed with some vague memories meeting Lorraine, his deceased wife.  He sees the Navy psychiatrist assigned to his case, Commander Wright. Since Paula is not there, Wright can devote his full attention to his patient instead of trying to seduce Bret’s girlfriend.  Bret discusses his memories of Lorraine and presses Wright for details.  Wright refuses, telling Bret, “You’ve got to remember for yourself.” Frustrated, Bret responds, “I don’t see any purpose in this mystification.”

He is not alone.