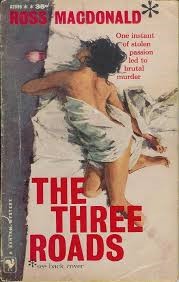 ANOTHER POINT OF VIEW

This is a pivotal chapter that develops not only the plot the but the theme of the novel.

Taking advantage of the third person form, the chapter is told from Bret Taylor’s point of view.  It starts with a flashback when he got out of Paula’s car.  Brett takes the first of many of his taxi journeys, this one to the (wait for it) . . .  Golden Sunset Café.  From the impossibly detailed newspaper clippings given him by Klifter, Bret knows that Lorraine was last seen alive drinking at this bar by a bartender named Rollins.  The bartender is not there, so Bret settles down to drink and wait.

In a passage not critical to the action, Bret looks around the room and notes a flashy young man in a back booth who briefly looks at him, then looks away.  This is Miles, who has just described the same moment from his own perspective at the end of the preceding chapter.  Macdonald will execute several of these doublings, and I think this is part of what Peter Wolfe had in mind when he talked about the “shrewd literary judgment” associated with Macdonald’s use of the shifting third person point of view. If you read slowly enough to notice, the doublings add a sense of realism to the action.

Movie Recommendations at No Extra Charge

For those of you who are moviegoers, the French-Polish Three Colours trilogy (1993-9994) makes good use of repeating the same scene from the standpoint of different participants.

A million similar stories were playing out in the aftermath of the war, and Brett pays little attention.  He only listens because he feels it would be rude to snub an enlisted man.  But once the warrant officer is finished, it gets interesting.

Macdonald shifts the point of view back to Miles, who decides impulsively to take advantage of the opportunity.  Assuring the bartender that he is a friend of the unconscious officer, Miles takes Taylor to his home and puts him to bed.  Taylor wakes up long enough to be sick.  Miles introduces himself, using a false name on the off-chance his real name might mean something to Taylor.  When Miles offers to let Taylor sleep it off at his house, Taylor is understandably cautious.  Then he decides that Miles is just a Good Samaritan and accepts the offer.  The chapter ends with Taylor going back to sleep and Miles heading out to keep the appointment with Paula to get his promised two thousand dollars to get out of town.

Another Fine Mess You’ve Gotten Us Into

At the end of the chapter (which is also the end of the third section of the book) the book is dead in the water as a mystery but damned exciting as a thriller.