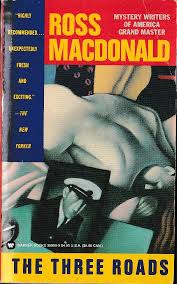 Chapter Eleven ended with Miles going to meet Paula.  However, whatever happened is hidden from the reader for the moment.  Odd for a mystery but par for the course in a thriller.

Chapter Twelve, the first chapter of Part IV, Doomsday, relates the morning after the bar fight. Taylor is eager to continue his investigation.  Taylor and Miles have a strained conversation. They are each getting on each other’s nerves, though for different reasons.  Taylor is understandably suspicious of Miles’ generosity. Miles has seen that Taylor’s pockets are stuffed with the newspaper clippings about Lorraine’s murder, and he is starting to question whether having contact with Taylor was a good idea after all.  It’s so unfortunate that no one warned Miles to stay away from the Golden Sunset café and to avoid Taylor at all costs.

Miles convinces Taylor that his uniform is too torn and dirty to be worn and persuades Taylor to wear some clothes of his own instead.  Although Taylor feels uncomfortable in Miles’ stylish clothes, he admits that the two of them are the same size and that the clothes fit him well.  Several commentators have noted this as symbolic that Miles is an alter ego. Taylor took the high road, seeking credentials and respectability; Miles took the low road, living by his wits in a variety of shady ways.

The chapter ends with Miles taking Taylor’s uniform to the tailor shop.  Miles’ confidence is returning and he plans to keep the deception going, although what he hopes to gain is clear neither to the reader nor to himself.

When he returns to the apartment Taylor is gone, leaving a note thanking him and saying he will be back.

There is a small confusion in the point of view in this chapter; at the start we are privy to Taylor’s thoughts and then we are getting the thoughts of Miles.  It has no consequence to the narrative.

This Time We’re Really, Really Going to Investigate This Murder, I Promise!

When Taylor finally gets down to business, he is an impressive detective.  As he remarks, he gets as much done in a day as the LAPD did in nine months.  Taylor’s talent is a peculiarly effective combination of bribery and threats.  It’s convincing even though we know he has no investigative experience.  It works because we believe that Taylor wants to know so badly.