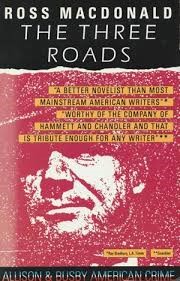 THE INVESTIGATION CONTINUES.  AFTER SOME HICCUPS

Chapter Sixteen starts with an interesting complication.  After he leaves his house he takes a taxi back to Miles’ apartment to reclaim his uniform.  When he arrives Miles declines to let him in, saying that he has a woman there. He tells Taylor that Taylor can pick up his uniform at the tailor shop.  This would all be innocuous, except that Taylor has seen a car like Paula’s parked on the street out front.

It might have been interesting to let the uncertainty play out, but Macdonald chose not to take that path.  While Taylor and Miles are talking at the door, Paula jerks it open.  She notes that Taylor addresses Miles by the alias Miles gave, and draws the appropriate conclusions.

Taylor gets into Paula’s car. The mood is tense, although not for the obvious reasons.

I am going to quote the conversation because it marks an early appearance of the kind of crisp dialogue Macdonald would become famous for:

“I have the right to ask you to stay in this car and come home with me.” [Paula says.]

“Is your dead wife more important than our future?”

“My future won’t begin until I’ve licked the past.”

When Paula flatly refuses to help him with Miles, he gets out of her car and walks away.  Again.

Taylor displays his investigative talents once more. He dragoons Garth into cooperating again. Taylor gets Miles to answer the door under the pretext of reclaiming his hat and tie while Garth watches from a distance.  Although Garth is desperate not to become any further involved, he identifies Miles as the man who hit him the night Lorraine died.

And for good measure, Taylor also forces Garth to sell him Garth’s pistol.

Armed with the gun, Taylor goes to Miles’ apartment, but Miles is gone.  Taylor searches the place, but discovers nothing except that the name Miles gave him was false.

Taylor realizes he has no chance of finding Miles, now that Miles knows that Taylor is after him.  He also realizes that Paula is mixed up in this.  The possibility that she may have some criminal responsibility for Lorrraine’s death makes Taylor decide not to call the police.

He takes a taxi to Paula’s house but doesn’t go inside.  He has the driver park down the street and he settles in to watch.

After a few hours, a middle-aged woman appears at Paula’s.  The two women shake hands formally and go inside.  There is something familiar about her but Taylor cannot imagine who she is.

This is a bit shorter than my usual posts but I cannot go further without a spoiler.