The Moving Target Part One 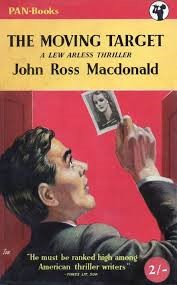 Macdonald’s fifth book is a watershed event for two reasons.  First, Macdonald begins to display a sense of his own voice. Second, he introduces Lew Archer as a tool in developing that voice.

By 1949, the year of publication, he had four books under his belt. He has paid his dues by writing sensationalized potboilers, derivative tough-guy stories, and overambitious psychological thrillers.  As Carol Shields said, all writers have a lot of bad material inside themselves and when they get through that, their true worth emerges.  I will put it more kindly by saying that in The Moving Target, Ross Macdonald begins to find his voice.

What does it mean when writers find their voice?

I am no English professor, just a writer. To me, “voice” is more than style, although voice includes style.  It is about finding the core issues you need to write about and finding the right approach, for you, to those issues.  What are Macdonald’s issues?

What is Macdonald’s voice in his mature work?

Simply put, cool irony. Macdonald finds, in this book, a way of expressing his concerns clearly but without excess.  His characters, especially Archer, will engage in patter, but he seldom falls into the overwritten bombast of the early books.  He is learning, quickly, to avoid overwriting altogether.  He makes telling one-sentence observations about the absurdity of displays of wealth or sexual attractiveness but stops there.  By now he has learned to leave some of the work to the reader.

No one could disagree that the style of the book is an important step forward.  But equally important is the introduction of Lew Archer as his detective.   We will spend some time examining who Archer is, but first let’s talk about his role in Macdonald’s work.

Lew Archer is not nearly as important as a character as he is as a marker of the restraint shown in Macdonald’s mature style.  Macdonald was correct when he described Archer as a deliberately narrowed version of the writing self, so thin that if he turned sideways he would disappear.

Macdonald’s genius was to downplay the personality of the detective and let the story have its proper focus.  If the crime is the central element of a murder mystery, the criminal is the person of central moral interest to the reader. The wrongdoer, and why he did it, is the center of the story, not the person digging out the facts.   Macdonald went out of his way to create a detective who will not distract us from that core truth.  Lew Archer is a man of qualities, of course; he is relentless, imaginative and energetic in his pursuit of the solution, but he is nothing outside of the case he is working on.  He may make mistakes, but they seldom flow from his character.  They are simply errors in judgment.  The books turn on the investigation of the crime, not the personality of the investigator.

An example not followed

Macdonald’s choice is more admired than imitated.  Anyone who follows a modern mystery series will be told the family background, culinary habits, sexual orientation, educational background, and sports and hobbies of the detective, usually by the third chapter.  I plead guilty as well.   Tremendous discipline is required to write the detective as a shadow and focus on the crime and the criminal.  The temptations only increases in a series.

The Moving Target is a start, not the culmination

It does not take away from Macdonald’s achievement that he does not yet display complete control of his material.  The second half is weaker in terms of dialogue and characterization and I wonder if he either rushed it through or failed to pay enough attention to revision in the later chapters. The book has weaknesses in character development, inconsistent language, and plotting decisions that have been widely criticized.  But The Moving Target shows the basic approach Macdonald will follow in nearly all his later books.  From here on, it is a matter of refinement.