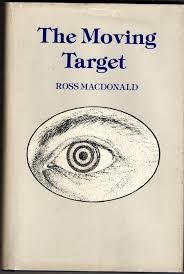 Archer appears in 19 novels between 1949 and 1976, as well as half a dozen short stories.  As we finish The Blue Hammer after 27 years, what do we know about him?

(My thanks to Robert L. Gale’s A Ross Macdonald Companion and Tom Nolan’s biographical sketch in The Archer Files as the basis for my summary).

Macdonald was stingy with his information for a reason.  He gives us the bare minimum necessary to allow Archer to plausibly function in the novels, and nothing more.  He tells us plenty about the other characters, as least as much as Archer can absorb in the course of the action, because he wants us to look out at the world, not in at the narrator.

Do not confuse Lew Archer with a character

I mentioned in the prior post that in this book, Macdonald shows his awareness that the reader should be allowed to do some of the work.  The reader of a Lew Archer novel fills in the details necessary to understand him as a full participant without ever realizing it.

The early fiction of many writers is overdetermined.  Readers need some reason why the plot develops as it does; they don’t need a story where no other choices were possible or where they have perfect knowledge of all the characters and events.  Readers like to fill in gaps if they are not too large.  It is a mark of self-confidence when the author leaves it to the reader to decide how they want to react to the story.

On a first reading, it is easy to miss exactly how ghostly a presence Archer is.  He seems like a Joe Friday, “just the facts, ma’am,” figure.  On close examination, his special status becomes more apparent.  Everyone else acts on their own (usually bad) motives.  Archer is driven only by the logic of the job at hand and his own sense of dedication.  Emotional reactions are internal; it is rare for Archer to express his feelings and even more rare for him to act on them. (His momentary flirtation with Miranda in The Moving Target is a notable exception, and there will be a few others in the course of his career.) His role is larger than that of a Greek chorus, but less than anyone would expect from a first-person narrator who also is the professional hired to solve the case.

Archer was a wise choice

Macdonald said that the Lew Archer character gave him the asbestos gloves he needed to handle combustible material.  Macdonald was a man of powerful emotions who’d suffered a terrible childhood, and he had a tendency to overwrite emotional scenes, most particularly the dialogue.   Archer gave him the distance he needed to achieve his remarkable body of work in his artistic maturity. I don’t think Macdonald could have achieved what he did without Archer.

Before we dig into the book we need to look at what the commentators have said.  Spoiler alert—it’s all over the place.