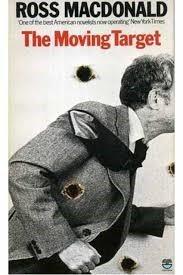 “A big comedown for Kenneth Millar, not only from The Three Roads but even from Blue City.”

Alfred Knopf, Macdonald’s publisher, thought the book was nothing more than “fair to middling run of the mill stuff” and that the ending was “unconvincing and thoroughly bad.” He did not go as far as the Knopf in-house editor, who described the book as “boringly mediocre” and advised rejecting it even at the risk that the author would take his business elsewhere. Knopf initially rejected the book unless Macdonald made substantial changes, including a new ending, and changed the unfortunate original title of The Snatch.  When Knopf agreed to publish the rewritten version, the advance was less than that made on Macdonald’s previous books and the royalty percentage was reduced.

“The Moving Target freed Macdonald from the problem he had with other narrative perspectives.”

Bernard Schopen, in Ross Macdonald, pays little attention to the plot, but makes a detailed analysis of the importance of his detective. “Lew Archer as a character does not account for the superiority of The Moving Target, however; it is his function as narrator that gives the novel its distinction.”  Schopen describes, accurately, how Macdonald’s placement of Archer “on the emotional periphery of the novel” allows the author to tell a more intricate story than appears on an initial reading.

“Its search for meanings rather than sensations get the Archer series off to a fine start . . . The flaws do not pit the handsome sheen of the novel.”

Peter Wolfe, in Dreamers Who Live Their Dreams, admires both the pace and texture of the novel, but takes Macdonald to task on the question of the ending—particularly the lack of plausibility of Macdonald’s solution—a matter we will discuss in more detail later.  He takes Macdonald to task for his uninformed description of marijuana use.  But on the while, Wolfe’s attitude is positive.

“The first installments in the Archer series are . . . rough and mixed in their effects: there are fistfights and psychoanalytic explorations, tough talk and literary allusion.  There are structural anomalies . . . .”

Michael Kreyling, in The Novels of Ross Macdonald, devotes a full chapter to this book, which not only summarizes the plot but roots Macdonald’s work in the poetry of Coleridge and the influence of W. H. Auden, one of his professors at the University of Michigan. Kreyling suggests that the strengths of the book, especially as indications of his future work, are more important than its flaws.

“The Moving Target is a major step forward in Macdonald’s portrayal of the complexities and ambiguities of evil.”

Jerry Speir, in Ross Macdonald, identifies “several firsts.” Not only is it the first Lew Archer, it is the first appearance of the imaginary city of Santa Teresa, loosely based on Santa Barbara, which Macdonald will use as his setting for the novels not set in Los Angeles.  Also, Macdonald’s opening framing of the story—Lew Archer in a landscape of wealth and power— will be used repeatedly and with increasing skill and ironic humor in later books.  Speir ends his summary with the observation, which applies to most of Macdonald’s books, that “although one character . . . is responsible, there is no one villain; the motivations of evil are diversified and diffuse.”

“The Moving Target is the high point of recent American books . . . You can put this on your Hammett-Chandler shelf; it won’t be at all out of place in that company.”

Anthony Boucher was a great champion of Macdonald’s work and praised him both privately and in the review in Ellery Queen Mystery Magazine.

“What strikes me about the book . . . is an effect that is rather repellant.”

Raymond Chandler wrote a scathing analysis of the novel to a mystery reviewer, criticizing its “pretentious phrasing” and accusing the author of not understanding the use of the simile.  Fortunately for Macdonald, he did not learn of Chandler’s low opinion until many years later.

Kenneth Millar, after selecting a pseudonym for this book

“I doubt I will be doing any more straight mysteries . . . I am relieved it is not going to be published under my name.”