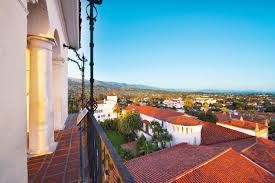 Macdonald begins his fifth book with an approach he will employ many times—a description of Archer’s surroundings.  These descriptions always advance the action and are never just for the sake of grounding the story.

Archer is in a taxi on his way to meet his new client, Elaine Sampson, at her luxurious beachfront home.  Where the cab turns off 101, the landscape is scrub oak.  They pass a sign as they enter the development, warning that they are on private property and that permission to pass is revocable at any time.

The light-blue haze in the lower canyon was like a thin smoke from slowly burning money . . . . Private property: colour guaranteed fast: will not shrink egos.  I had never seen the Pacific look so small.”

Elaine Sampson is the first of the many vivid characters Archer meets.  She is about 40 and was the mistress of Ralph Sampson before he married her six years before.  “She was very lean and brown, tanned so dark that her flesh seemed hard . . . Her age was as hard to tell as the age of a figure carved from mahogany . . . Her toenails and fingernails were painted the same blood color.”  She uses a wheelchair, saying that she was paralyzed from the waist down in a horse-riding accident.

She outlines the case to Archer, to use her own description, “bluntly.”

Archer is introduced to Alan Taggert, a big, handsome man in his early twenties who is Ralph Sampson’s private pilot and was the last person to see him before he disappeared.

Archer also meets Miranda Sampson, about twenty, Ralph’s daughter by a prior marriage.

Archer decides to have Taggert fly him to LA, but first stops at Graves’ office.

The chapter ends with Graves accompanying Archer to the waiting car and finds that Miranda has decided to accompany Taggert and Archer to LA:

“’She’s a marvelous kid,” Graves repeated.  At forty he was drunk on love.

“He sobered up in a hurry when we reached the car.  Miranda was in the back seat with Alan Taggert. ‘I followed you in.  I decided to fly down to Los Angeles with you. Hello, Bert.’

“He gave her a hurt took.  She was looking at Taggert.  Taggert was looking nowhere in particular.  It was a triangle, but not an equilateral one.”

Macdonald does everything we can expect in the first twenty pages: