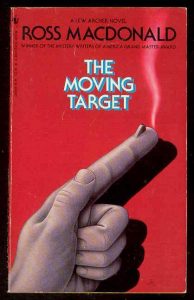 TIME FOR SOME FLOUNDERING

The pace slows considerably in the next five chapters.

(Some information omitted or re-arranged slightly in terms of presentation)

The only thing known about Sampson’s disappearance is that he didn’t show up at his bungalow at the Valerio hotel.  Archer learns one important fact.  Sampson called the hotel from the airport for a limousine and then almost immediately called back to cancel it.

Archer searches the bungalow and finds a photograph of a fading actress, Fay Estabrook.  After some scenes which, as Peter Wolfe pointed out, add nothing to the book, Archer takes her out on the town and exploits her weakness for alcohol to the point where she is nearly unconscious.  He takes her home and searches the place.

Archer follows a lead to a jazz singer, Betty Fraley, at her venue, a down at the heels bar called the Wild Piano.  Although a gifted singer, she is clearly under the influence of a cocaine addiction.  She discovers Archer is a private investigator and calls the club bouncer, a powerful thug named Puddler, to take him into the alley and beat him up.  Puddler’s work is interrupted by Taggert, who said he had come to the Wild Piano himself in hopes of getting a lead on Sampson.

Things are heating up.  A letter has been received from Sampson, claiming he needs $100,000 in small bills for a business venture.  Although Elaine Sampson recognizes his signature, no one believes that this is anything other than a ransom demand.

Events and clues pile up.

The Temple in the Clouds and other fictions

Archer and Miranda visit the hunting lodge on the side of the mountain that Sampson gave to Claude, the “holy man” a few months ago.  It is now being used as a “temple” for Claude and his followers.