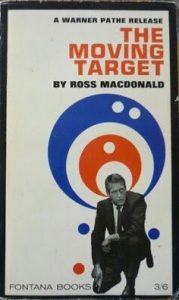 IN THE THICK OF IT

A step forwards, a step back

Archer goes to The Corner, the roadhouse on the matchbook from the dead man’s pocket.  It’s as grim as The Wild Piano, and doesn’t even have drugs or jazz music.  At least the food and drink are cheaper.

Pretending to be a bookmaker, he gets the barmaid to identify the dead man as “Eddie” and learns that he is a regular who has ties with Las Vegas.

Archer is lingering over his meal when a sheriff’s deputy shows up and Archer’s bookie story unravels in front of the staff he’d been questioning.  He has a nasty verbal confrontation with the deputy and even threatens to kill him.  Archer leaves The Corner and parks down the road, where he sees the blue truck he was waiting for, pull into the lot.

The presence of the deputy, which seems gratuitous at first, actually has a point. When the blue truck pulls into the parking lot of The Corner and the driver sees the Sheriff’s car, the driver runs back to the truck and flees.  This gives Archer a basis to follow it.  Arches recognizes the driver as Puddler, who had beaten him up at The Wild Piano before Taggert intervened.

The beachfront isn’t what it used to be

Archer follows Puddler’s truck to a truly disgusting bungalow on the beach.  The construction is so flimsy that he is able to overhear Puddler’s conversation with an utterly dissolute woman.  This is the first of two convenient eavesdropping episodes in the book.

The woman, Marcie, is the girlfriend of Eddie, the dead man in the limousine.  Eddie and Puddler are in an unspecified criminal scheme with Troy.  Eddie is revealed to have a criminal record. Puddler’s attempts at romancing Marcie fail when she holds a knife to his throat, and he leaves.

The Temple in the Clouds isn’t what it used to be, either

Archer trails Puddler’s truck to the Temple.  Archer has his gun on Claude and Puddler, but then he is attacked by a dozen Mexican men and knocked unconscious.

Archer’s conversation with Troy reveals that Troy does not know about the Sampson kidnapping at all, let alone the fact that Eddie is dead and the money has disappeared.

Troy tells Puddler to take Archer to an abandoned pier and await instructions, presumably about killing Archer. There is no logical reason for Troy to hesitate, except that it creates an opportunity for Archer to survive.

Puddler takes Archer, still tied, to an equipment shack on the derelict pier.  Archer deliberately needles Puddler to the point where Puddler cuts Archer loose so the two can have a fair fight.

Archer’s idea of a fair fight involves a heavy file he seizes from a bench, which he uses to slash Puddler’s forehead to blind him with blood in his eyes, as well as stabbing him with it. The two struggle outside and then fall off the pier together. Archer holds Puddler underwater till he drowns.

Because Archer’s car keys are in Puddler’s pocket, Archer has to hot wire his own car to drive back to the Sampsons.

The Sampson house is just as dysfunctional as ever

Archer arrives and learns from Felix, one of the household staff that Miranda had gone out last night and put two hundred miles on her car.  However, she does not drive a cream-colored convertible.

(I should mention in passing that everyone but Archer, especially Graves, treat the staff as dirt. Felix tells Archer that he is from a respected family on Samar and that he is in America to study at California Polytechnic.)

Felix also tells him that the only extension that is connected to the phone Archer used yesterday is in Taggert’s room.

Archer calls the police and learns that “Eddie” is Eddie Lassiter, with a long criminal record.

Shortly after, Graves arrives with the details.  Lassiter was involved in an escalating series of crimes involving drugs, thefts, and armed robberies.  He has a sister Betty with a criminal record of her own involving drugs as well as other offenses.

Felix suggests that Betty Fraley the jazz singer from The Wild Piano may be Betty Lassiter, Eddie’s sister.  He says that he has seen Betty Fraley’s records in Taggert’s apartment.

It will come as a surprise that I can’t go beyond page 134 of a 186 page book without a spoiler, but that’s the way the book is written.