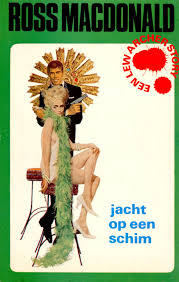 THE OTHER SHOE DROPS

How not to rescue a kidnapped millionaire

Archer makes the long drive to the abandoned beach club, guided by directions from Betty Fraley.   When they arrive, Betty tells him that he can’t take his car all the way down to the old clubhouse because the road is washed out.  Archer takes the keys and goes down the slope.  As he explores the dark and abandoned structure he is suddenly hit on the head and knocked unconscious.

When he comes to, Graves is there, alone.  Graves said he tried to call the Sheriff but that the Sheriff was busy on another matter.  Graves also expresses surprise and asks how Archer got there, since he didn’t see Archer’s car.  Although Archer has the keys, he remembers he had hot-wired the car and realizes that Betty must have re-connected the loose wires and driven away. Given her criminal background this is perfectly possible.

Archer continues his exploration and finds Sampson’s dead body, still warm.  Sampson has been strangled with one of the ropes used to tie him.

Since there is nothing they can do for Sampson, they drive to the bus station and recover the ransom money.  Archer waits to see if Fraley shows up, but she does not.  Then he learns that she wrecked his car fleeing from the police and is dead.   (The death is highly ironic.  Eddie, the brother she killed was an excellent professional driver and would not have wrecked. So you probably should not shoot your siblings after all.)

Archer has an argument with the Sheriff, who accuses him of allowing Sampson to be killed by not contacting him first.  The Sheriff denies that he was away on other business and says he was never called by Graves or anyone else.

As Archer and Graves drive towards the Sampson house, Graves says that he and Miranda were married at the courthouse earlier that day.  Archer accuses him of killing Sampson. Archer’s reasons:

Graves admits it, and although he has a gun and a car, he makes no effort to either leave or to shoot Archer when Archer goes into the house to report to the Samsons.

Mrs. Sampson is relieved to know she has outlived him. In fairness, she is heavily sedated, but there is no reason to suspect her attitude will be any different in the morning.

Miranda is understandably shocked at the news.  There is the predictable pass at Archer. He and she drive to meet with Humphreys, the District Attorney, apparently for advice. Humphreys tells them that Graves is there and that he confessed.

The book ends with Archer turning Miranda down and driving her home.

Next we will spend a couple of posts examining the book as a whole, with particular attention to the ending.