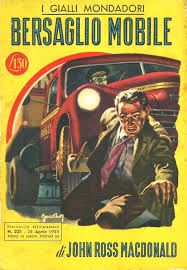 WHAT’S NOT SO RIGHT ABOUT IT?

The Moving Target is not a locked-room mystery or a police procedural; it is a drama arising from the personal circumstances of the characters.  What grades will be give student Macdonald for his submission to the Advanced Mystery Writing course?

The book does a fine job of creating a complicated family dynamic but lacks a sense of drama in how to resolve the conflicts.  The family patriarch and the center of Archer’s concern never appears in the book except as a corpse.  The plot gives no opportunity to see him as a person.  And the little we know does not make us like him.  Organizing a book around the rescue of someone who no one believes is worth rescuing is hard work.

Why the quickie marriage to Miranda?  Archer puzzles about this but gets no good answer—I suspect because there is none.  If Graves was afraid Ralph Sampson would disinherit Miranda, as unlikely as that seems, why antagonize Ralph by precluding a chance for a big wedding where the father could give away his only remaining child?  It cannot have been a lawyer’s ploy to keep Miranda from testifying against him because she knows nothing.  Miranda is impulsive enough to like the idea but it’s one more stress on the credibility of the story.

Peter Wolfe points out plotting problems.  Macdonald writes several scenes in chapter 6 where he follows Faye Estabrook and masquerades as an exterminator that have nothing to do with the plot and could have been cut.  Wolfe also points out that there is no reason for the lengthy scene where Archer feeds Estabrook alcohol and that the book could have been significantly shorter without any loss of narrative cohesion.

A more serious criticism Wolfe makes is that Macdonald’s ignorance of drugs, describing several characters as being in the throes of painful withdrawal from marijuana and also describing a professional driver as smoking marijuana on the job.

For my own part, Macdonald displays a sketchy knowledge of guns.  Graves describes in detail his pair of .32 target pistols.  Why a pair?  They are for target shooting, not duels.  Why that caliber?  Pistol competitions use .22, .38. and .45.  The .32 is an arcane little peashooter of a caliber, with none of the convenience and economy of the .22.  I cannot swear that no one ever made a “target” pistol in .32 caliber but I would be surprised if they did.  The point is a small one, and ballistics does not figure into the story, but it threatens our willing suspension of disbelief.

At the end of my own Cold July, my detective wonders whether he was right to take on the case in the first place.  Although I am satisfied it was the right ending for that book, the ending bothered me because mysteries are about how the detective sets the world right.  I sometimes call it an anti-mystery.

After finishing Cold July and re-reading The Moving Target, I find myself asking the same question.  If Archer had never been hired, what would have happened?  If the kidnapping had gone smoothly and the ransom paid, Taggert and Betty would have disappeared with the money and Ralph would have come home alive.  Claude would have been able to keep his side hustle with the illegal immigrants.  If Taggert disappeared, Miranda would have more readily chosen Graves, whose career would not have been ruined.  The only person who benefits from the outcome is Elaine Sampson.

It is hard to escape the conclusion that Archer did more harm than good.