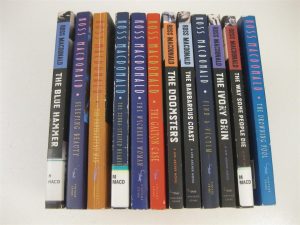 The Archer of 1949 is not the Archer of 1976.  Readers who approach the series backwards and start with The Blue Hammer, Sleeping Beauty or The Underground Man are in for a shock.  By the end of his career, Archer is so quiet that he has been described as a “secular priest.” The Lew Archer of The Moving Target and The Drowning Pool is free with his fists as well as his mouth, and it takes a decade for him to simmer down.

There are a several reasons for this:

The take-away is that the Lew Archer you have met is going to be thirty years older by the time you say your last good-bye, and be prepared to watch him change.

Next we turn to The Drowning Pool.