The Drowning Pool Part One 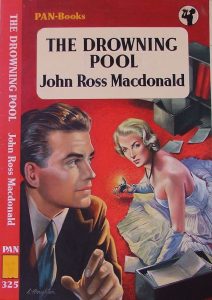 “The motivation in Pool is more complex than in Target; conveying it is a plot not only elaborate but also tight and believable.  Pool has structural flaws . . . . But the book also shows new technical insight and control.”

Peter Wolfe, in Dreamers Who Live Their Dreams, felt that the portions of the book dealing with family issues showed Macdonald working towards his “true subject” of the role of the family and was willing to forgive the author’s “flat, cardboard villain” in the organized crime portion of the story.

“The Drowning Pool is a schizophrenic novel.”

Michael Kreyling, in The Novels of Ross Macdonald, identifies two plots in the novel sometimes working at cross-purposes.  In one, Archer becomes a sort of psychoanalyst working with a dysfunctional family; in the other, Archer reverts to being the traditional Hammet hard-boiled detective. Kreyling argues that “in grafting Hammett’s idiom to Macdonald’s ‘brainer’ sense of good and evil the experiment does not work; the result is a two-headed calf.”  Kreyling’s view is that “the weaving of the two plots is structurally superficial” and that the ending is “contrived.”

Kreyling takes the author to task for Archer’s occasional clumsy patter that recalls the silly, self-conscious dialogue that married his early books. “Macdonald, in the second Archer novel, was still working toward the Hammett ideal of a transparent style . . . . The way is not smooth.”

“The Drowning Pool has a fractured feel to it, as if Macdonald began by writing from his own imagination only to retreat to the safety of the generically conventional.”

Bernard Schopen, in Ross Macdonald, notes that the initial third of the book, which focuses on the client and her family, are “well handled, but argues that the other two thirds, where the story swerves into dealing with conventional crime, is “static, less energized and intense than the first section  . . .  After placing [the client] and her predicament in the forefront of our concern . . . Macdonald largely abandons her for excursions into the criminal milieu.”

The Author and the Publisher

Macdonald had turned to mysteries as a way of paying the bills following his inability to finish his literary novel, Winter Solstice. “By God I’ll fall back on my thrillers rather than not be published . . . Writing badly is only the second sin of my book; not being published at all is the first.” He was referring to The Moving Target but The Drowning Pool followed quickly, before The Moving Target was even published.

Tom Nolan’s biography says that Macdonald felt that The Drowning Pool was an advance on The Moving Target but Michael Kreyling notes that “Macdonald often forbore to mention his second Archer novel in interviews.  It was not included in any of the three omnibus editions of his work.”

Alfred Knopf, Macdonald’s publisher, was well pleased, saying the book was “a good job” and offered Macdonald twice the advance he’d paid for The Moving Target.  Despite Knopf’s optimism,, the book’s initial sales were poor and reviews were mixed.

Margaret Millar, Macdonald’s wife, criticized the ending and felt that one of the subplots was contrived. 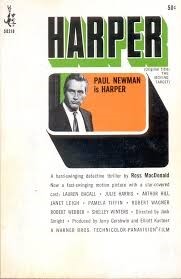 The Moving Target was made into a highly successful movie in 1966, Harper, starring Paul Newman, with minimal changes in the plot.  The screenplay by William Goldman launched Goldman’s career. Newman went on to star in a movie version of The Drowning Pool in 1975, which departed significantly from the book, a decision that the later screenwriter admitted “was probably a mistake.” Despite a cast that included Joanne Woodward, Anthony Franciosa, and Melanie Griffith, it bombed badly, not even earning back half of its production costs, let alone the costs of distribution.  The moral is that if the book is worth buying at all, it’s probably worth filming as is.