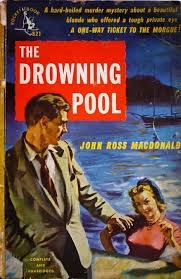 GETTING OUR FEET WET

This blog is about Ross Macdonald’s books, not his life, and I refer the reader to Tom Nolan’s unsurpassed biography on the subject.  However, we need to keep a few facts of his life in mind:

“If you didn’t look at her face she was less than thirty, quick-bodied and slim as a girl . . . The eyes were a deep blue, with a sort of double vision.  They saw you clearly, took you in completely, and at the same time looked beyond you . . . About thirty-five, I thought, and still in the running . . . Her face was clear and brown.  I wondered if she was clear and brown all over.”

By contemporary standards, this is male chauvinist objectification of the female body at its worst, an example of the demeaning effect of the male gaze.  In 1950, especially in noir fiction, it was an expected element of the plot.  My own view is that he deserves to be judged by the standards of his time, both socially and artistically.  Compared to Micky Spillane he was a raging feminist.

We have just met Maude Slocum, Archer’s prospective client.  She is coy about revealing her business and prefers bantering at first.

“And can you whip your weight in wildcats, Mr. Archer?”

“Wildcats terrify me, but people are worse.”

She talks in riddles, reluctant to get to the point, a standard narrative move early in mystery novels.  I just did it myself in August Hearts. Private detective stories are often about sensitive personal situations, and it would be jarring if the client set out the problem in a concise, businesslike way.  The last time I saw such a thing was the first appearance of Bridget O’Shaughnessy, the femme fatal in The Maltese Falcon.  Her manner indicates to both Sam Spade and his partner that she was lying.

What is unusual about their interchange is Archer’s lack of patience with her meanderings.  He is short and sarcastic with her multiple times in a fairly short chapter.   But in fairness to Archer, clearly she is hiding more than she reveals.

The penultimate paragraph of the first chapter is pure Macdonald:

“The letter and the twenties were side by side [on my desk.] Sex and money: the forked root of evil.  Mrs. Slocum’s neglected cigarette was smoldering in the ash-tray, marked with lipstick like a faint rim of blood.  It stank and I crushed it out.  The letter went into my breast-pocket, the twenties into my billfold.”