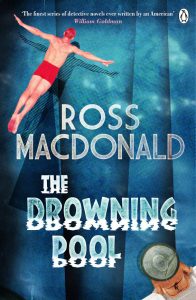 THE PLAY’S THE THING

Macdonald’s gift for setting up the mystery economically and gracefully seldom deserted him.  Chapter Two is typical.

Archer checks into a husband and wife-run motel in Quinto.  The wife positively bubbles with enthusiasm about the charm of the place, comparing to the unsavory oil boom town of Nopal Valley, which was ruined by “great hordes of low-class people, Mexicans and dirty oil crews.” She tells him that the play he is interested in is in rehearsal and gives him directions.  When the husband takes Archer to his room, the husband offers to sell the motel to Archer so he can buy a liquor store in Nopal Valley. “The Valley’s lousy with money since they struck oil and there’s no spenders like oilmen.”

Archer drives to Quinto and sits in the back of the playhouse, watching the rehearsal of a truly terrible play.  In the course of his few minutes we are introduced to several of the major characters.

Chapters Three through Seven all occur at the Slocum house, an oasis of old money on a mesa overlooking the smells and dirt of the oil boom town down in Nopal Valley.  The house is luxurious, but Macdonald spares us the satiric descriptions he gave us in The Moving Target.  But the prematurely sexualized daughter from the earlier book, Miranda Sampson, reappears in the form of Cathy Slocum, the daughter of James and Maude, who we met briefly in Chapter Two:

“A woman in a red sweater and slacks was curled like a scarlet snake in one corner of the a green canvas porch swing . . . It was one of those female bodies that bloomed very young.  Her eyes were large and deep like her mother’s, and she had better lines.  I could understand the chauffeur’s passion for her.  But she was very young.”

Almost immediately, Archer overhears an argument between James and his daughter Cathy, whom he accuses of seeing Reavis after James fired him.  She denies it.  He says that Reavis’s chauffeur’s cap was in the car when James looked just now.  To Archer, James sounds more like a jealous lover than a concerned father, and Cathy’s responses are just as inappropriate.  The bizarre scene is soon interrupted by Cathy’s mother Maude, who warns her husband about paying too much attention to their daughter in threatening terms.

Archer has a companionable drink with Marvell, the playwright, who has a precise summary of the psychodynamics of the family.

“Poor dear James is positively hag-ridden by his womenfolk . . . They bleed him emotionally . . . His mother began it when he was a very small boy, and it’s gone on for so many years that he actually doesn’t know he’s being imposed upon.  Now his wife and daughter are carrying on the good work.”

When we meet the mother, the reader should not be surprised to see her carrying a large pair of pruning shears.

The mother is a barely agreeable piece of work: vain, egotistic, and deeply suspicious.  Archer talks to her long enough to discover her obsession with not allowing the Pareco Oil Company, which had done some test borings, to drill on the property.  It is unclear if her primary motive is to preserve the land or to keep her son from getting control of any more money than his small allowance, but her determination is clear.

Next we meet Ralph Knudson, the local sheriff, arriving for the party, in his police car.  Archer watches Knudson have a somewhat awkward greeting with Cathy Slocum and an even more awkward one with her mother, Maude.  “Hatred or some other feeling had drawn her as tight as a bowstring.” Maude, self-conscious, asks Archer to leave, saying that she thinks there is going to be trouble.