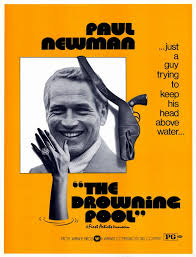 It’s a good thing for the reader that Archer was stubborn, because otherwise we would have missed one of the best sardonic descriptions Macdonald ever gives us of a cocktail party.  Macdonald had no use for the wealthy as an abstraction, and bringing a group of them together brings out a witty and humorous side.  The following isn’t essential to the plot but it’s too good to pass up:

“I listened to them talk.  Existentialism, they said.  Henry Miller and Truman Capote and Henry Moore.  Andre Gide and Anais Nin and Djuna Barnes.  And sex—hard-boiled, poached, coddled, shirred, and fried over easy with sweet, fresh creamery butter.  Sex solo, in duet, trio, quartet; for all-male chorus; for choir and symphony; and played on the harpsichord in three-fourths time.  And Albert Schweitzer and the dignity of everything that lives.”

Marvell accompanies James Slocum’s singing on the piano, and even Archer admits that Slocum is a talented singer.  But the mood is ruined when Knundson baits Slocum about his relationship with Marvell.  Maude takes over at the piano and calms the situation, but Knudson’s malice is clear.

It is not easy to leave a party at the Slocum’s without incident.  When Archer gets to his car, Cathy Slocum is inside, demanding that he drive her away, anywhere.  She is angry, apparently at her mother’s attempts to get her to get closer to Knudson, whom she detests.  She also senses that Knudson and James Slocum hate one another, and she sides with her father James.

No sooner does Archer get rid of Cathy and start back towards his motel in Quinto when he runs into the ex-chauffeur, Pat Reavis, hitchhiking.  The moment Reavis gets in the car, Reavis asks Archer what time it is, a question that will get the attention of any reader of mysteries even though we don’t yet know that anything happened.  Reavis is in a good mood and boasts about his exploits as a Marine on Guadalcanal.  He confirms Archer’s impression that James and Maude Slocum are waiting for his mother to die so they can sell the oil rights to Pareco Oil.

Since Reavis is in such a talkative mood, Archer tries to get even more information out of him.  The two go to Antonio’s, a bar in the rough oil town of Nopal Valley.  Archer likes the owner, Antonio, but finds Reavis to be obnoxious.  Reavis’ boasting is interrupted by Detective Franks, who tells him that the senior Mrs. Slocum is dead and that Sheriff Knudson wants to question him.  Reavis slips away into the men’s room without Franks noticing.  When Archer goes to look for Reavis, Franks shoots at Archer.  Their relationship is now on the wrong foot, and it is only made worse when Archer sees Franks pocketing a tip Archer had left for Antonio.  Archer feels no need to tell Franks anything about Reavis.

Franks drives Archer back to the Slocum residence and he is interviewed by Sheriff Knudson.

Maude and her husband James are arguing. Only a couple married for a long time could have a fight this nasty.  She wants a divorce and blames him for never standing up to his mother.  She says she only married him to give her unborn child (Cathy) a father and that she no longer has any feelings for him at all.  He suspects she is having an affair and she accuses him of having a relationship with Francis Marvell.  He agrees to give her half the property in the divorce but they argue about whether Cathy will go with Maude or stay with him.  He begs her to stay.  She refuses. When she says she can’t stand being married to a “fairy” he slaps her.

Archer backs away from his listening post. “I felt as if I’d been listening in on a microphone built into the walls of hell.”