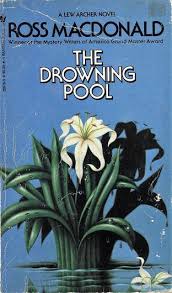 THE HUNT FOR REAVIS

Although Archer has no instructions from his client (he has not spoken to her since the death of her mother-in-law) he takes it upon himself to find Reavis before the Sheriff does,  It is not clear why.  Reavis didn’t send the letter that started the case—the wording is beyond his level of education. Knudson makes a reference to “a certain responsibility,” which is not explained, but perhaps refers to the fact that if Archer had told Detective Franks that Reavis was hiding in the men’s room, Reavis might be in custody already.

While he and Archer were drinking, Reavis had mentioned that he knew a girl, Gretchen, at a bar/brothel named Helen’s in Nomal Valley.  Archer locates Gretchen, who proves to be a very young part time prostitute.  She not only believes Reavis’ boasts about himself but thinks he is going to marry her.  She and Archer go to her trailer to see if Reavis is there. When they find he is not, she offers herself to Archer, who (needless to say) declines.

Gretchen mentions that Reavis has an apartment in Los Angeles, although she has never been there and isn’t sure of the exact address.  Archer is able to find the street, which turns out to be a series of near-shacks in a desperate part of town.   He spots Reavis and follows him, first on foot and then by cab.

Archer follows Reavis to an elegant nightclub where he sees Reavis with a middle-aged fat man and a beautiful young woman.  The woman comes to the bar, angry, and Archer offers to give her a ride home, which she declines.  She is Mavis Kilbourne, wife of Walter Kilbourne, the fat man.

Archer’s taxi driver loses the vehicle Reavis is in, so Archer decides to go back to Reavis’ apartment.  He discovers The Beat Up Suitcase, a staple of at least a third of the Ross Macdonald novels.  This one has Reavis’ military papers, showing that he was dishonorably discharged from the Marines without ever serving overseas, and that his real name is Pat Ryan. (The book will alternate between calling him Ryan and Reavis, but it’s the same loser.) Archer obtains an address for “Elaine Cassidy” of Las Vegas, who may be either a sister or an ex-wife.

Archer’s investigations are interrupted when he is knocked unconscious.

When he comes to, he is tied up and is being transported in a car.  When it stops he is taken out of the car by two thugs.  One of them leaves; we will meet him again later under the name Dr. Melliontes.  The other is left to watch Archer, with instructions to guard him till he can be interrogated.  Before that can happen, Mavis Kilbourne appears and distracts the thug.  Archer immediately disarms him.

While the two of them are busy untying Archer and tying the gunman, Mavis explains that she overheard her husband, Walter Kilbourne, giving orders to have Archer brought there, and she decided to intervene.  She wants Archer’s help in obtaining a canister of film from a safe in the house.  Archer helps her obtain the film, which her husband has been using to blackmail her.  The movie had been left in the care of the thug (Enrico Muratti) for safekeeping.  She wants to destroy it immediately but Archer has a better idea.  He tells Muratti that they will let him live if he keeps quiet to Walter Kilbourne about losing the film.  Archer decides to hold onto the film himself, but later, on the ride back to his car, Mavis snuggles up to him and later he discovers she has stolen the film.

In the morning Archer learns that Walter Kilbourne made his money illegally and is the owner of Pareco Oil, the company seeking to drill on the Slocum land.

Archer drives to Las Vegas to track down the “Elaine Cassidy” who has been corresponding with Reaves.  She turns out to be his sister.  Archer follows her to a remote cabin where Reaves is hiding.

Archer forces Reaves to drive his car back to the restaurant where he had first seen Elaine Cassidy to pick up a stranger who was looking for a ride to California.  Reaves has a package containing ten thousand dollars in cash, which Archer confiscates.   Reaves denies killing Mrs. Slocum and offers to split the money with Archer if he will let him go.  He is confident that Cathy Slocum will give him an alibi for the murder, saying that he was with her just before Archer picked him up.

Just before Archer, Reaves and the stranger leave for Nopal Valley, Archer calls the Sheriff’s office to let them know that he is bringing Reavis in.  Knudson is not there, but he leaves the message with the deputy on duty.

On the way to Nopal Valley they are confronted with a roadblock armed by six masked men who demand that they release Reavis to them.  Archer refuses, shoots one in the arm and threatens to shoot the rest.  But Reavis, thinking that they are rescuing him, clubs Archer.  When Archer wakes up he finds that the men have shot Reavis to death.