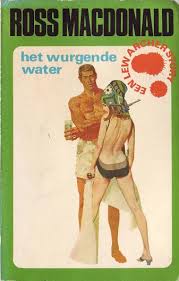 Archer drives to the Sheriff’s office to report Reavis’ murder (which occurred in another jurisdiction) and discovers that the person who had been on duty was Detective Franks, the deputy who had originally brought Archer in for questioning the night of Mrs. Slocum’s death.  He also finds that Franks never logged Archer’s call.

He goes to the Slocum house to tell Maude about Reavis.  He finds Knudson there, despite (or perhaps because) it’s the middle of the night.  Knudson is furious about the leak of information from his office but refuses to promise that he is going to take action.  Knudson is convinced that Reavis was the killer.  Reavis’ chauffeur’s cap was found in the swimming pool filters, which is enough for Knudson. Archer’s disclosure that Reavis didn’t get to his car for nearly an hour after the death  does not change his mind.

Archer has a conversation with Maude Slocum, who confirms that Kilbourne is behind Pareco Oil and mentions that he and his wife are in the harbor at Quinto with their yacht.

Archer finds the home telephone number for Detective Franks and parks near his house.  A taxi appears and a man with an injured arm enters the house.  Archer approaches the waiting taxi and bribes the driver to leave.  When the injured man reappears and discovers that he has no ride, Archer pretends to be driving by and offers him a lift.  Archer draws his gun and learns the identity of the man.  Archer confirms that he is the man he’d shot earlier that night defending Reavis.  He gets the man to admit that he and the others were paid by Kilbourne’s oil company to get rid of Reavis before he could talk.

Archer, worried about his own safety, goes to Antonio’s, the bar where he’d been drinking with Reavis, and leaves the ten thousand dollars with Antonio for safekeeping.

Archer goes back to the Slocum house, saying that he has to see Maude immediately.  His reason is not mentioned but presumably he wants to let her know that Kilbourne was behind Reavis’ death.  Whether he wanted to warn her about doing business with Pareco or if it was just a general warning we will never know, because she is dead in her locked bedroom, the victim of strychnine poisoning.  She had taken a bottle of cardiac medication from her mother-in-law’s medicine cabinet.

There is a brief typewritten suicide note giving no reason except a reference to “things I cannot face.” Searching her desk, Archer finds a chatty letter from a girlfriend, Mildred Fleming, from Hollywood.  There is also an old newspaper clipping of Knudson from Chicago showing Knudson making an important arrest.

Examining the typewriter, Archer realizes that the of the letters (the capital “D”) is slightly bent and that the same “D” is present on both the suicide note and the poison pen letter that started the case.  Knudson then shows up.   After reading the letter and the suicide note, he destroys both.  When Archer threatens him, he threatens Archer with kidnapping charges involving Reaves if Archer makes trouble.  Then Knudson throws Archer out of the house.

What The Case Needs is a Good Complication

Before Archer can leave, he is interrupted by a phone call from Mavis Kilbourne who frantically insists that he meet her at the Quinto pier as soon as possible.

Things start happening quickly, few of them having much to do with Maude Slocum.