The Way Some People Die Part One

The Way Some People Die 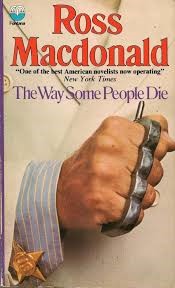 What The Critics Think

“The Way Some People Die is one of Ross Macdonald’s grimmest books.”

Peter Wolfe, in Dreamers Who Live Their Dreams, has a complex reaction to the book. He praises Macdonald’s colorful minor characters, as well as his use of innovative structural elements, such as creating a missing persons case in which the person is located early in the novel. He also notes that “for the first time in a Ross Macdonald novel, murder generates moral ambiguity.” Wolfe feels that Archer is a more complex character here than in the two previous books. But Wolfe ultimately is dissatisfied with what he identifies as the structural weaknesses of the plot.

“The Way Some People Die is structured to produce unusual effects.”

Bernard Schopen, in Ross Macdonald, offers little evaluation except to note that once the missing person has been located, the story becomes a mystery about the kind of person she is. “It is a mystery Archer never solves.” Although he praises Macdonald’s portraits of the criminals and unfortunates of the underworld he describes, he concludes that the novel ends “in an impasse of the inexplicable.”

“The Way Some People Die shifts away from the author’s concern for the wealthy in society to a portrayal of organized criminal elements.”

Jerry Speir, in Ross Macdonald, is also reluctant to provide a strong opinion. Speir finds many of the portraits of criminal life both vivid and an incisive critique of the human condition, especially his description of a professional wrestling bout. But he notes that we are not given sufficient information to make the motivations of the murderer understandable—a serious defect in a murder mystery.

Michael Kreyling, in The Novels of Ross Macdonald, detects a strong influence of Hammett—and even makes a case that a minor character early in the book is intended to be Hammett himself. Kreyling notes, along with the other commentators, that the book depicts “a bleaker moral wasteland than Hammett’s crooked metropolis.” He agrees with other commentators that the core problem of the book is the “problematic” psychology of the killer.

“This novel marks the emergence of what some critics have discerned as Millar’s misogyny.”

Matthew Bruccoli, in Ross Macdonald, defends him against this charge, arguing that Macdonald himself said that since women are often victims of society, victims tend to victimize others. Bruccoli offers nothing else evaluative.

“At once a vivid tableau of postwar Southern California and a stylish retelling of certain Greek myths.”

Tom Nolan, in his biography of Macdonald, usually reserves judgment about his subject’s books, but he makes an exception here. He describes the book as, “having a lot going for it . . . written with great assurance and style. In moving away from his ‘personal neurosis’ (as he saw it) and more into hard-boiled terrain, Millar reached a new level of achievement.”  Nolan is not alone. He notes that the New York Herald Tribune called it a work “with a rare freshness and originality,” and that the San Francisco Chronicle said, “The tough ones don’t come any better than this.” Nolan also reports the reaction of Anthony Boucher (a lifelong an enthusiastic Macdonald fan), to the book, “ . . . the best novel in the tough tradition that I’ve read since Farewell, My Lovely . . . and possibly since The Maltese Falcon.” Given that 21 years had elapsed since The Maltese Falcon, this is, as Nolan notes, “extravagant” praise.

What The Author Said in a 1966 Interview

“Some of my colleagues . . . think that The Way Some People Die is the best of my twenty books. I hope it isn’t.”

All the comments can be reconciled, at least to a point. A mystery novel, like any other work of art, is a complicated business and each reader approaches it with their own expectations and standards. For example, as we will see, Wolfe roundly criticizes some plot decisions I find very defensible, or at least explainable. Some of the critics felt that the final resolution showed moral growth on Archer’s part; I find it incoherent, but not enough so to spoil the fun of reading the book in the first place.