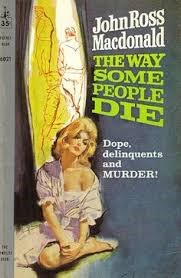 We open with Archer interviewing “Mrs. Samuel Lawrence” (she apparently has no first name) in her slightly run-down house in Santa Monica where she rents out rooms to tourists. She tries desperately to create a gentility that is at odds with her surroundings. Everything is faded and frayed, including Mrs. Lawrence.  As they make small talk, Archer surveys the furniture and bric-a-brac, and observes to himself, “If the lady has come down in the world, she’d brought a lot down with her.”

Mrs. Lawrence is a widow, Doctor Lawrence having died some years before. She has called in Archer to search for her 24-year-old daughter Galatea (Galley), who had been working as a nurse in Pacific Point. The mother had received a Christmas card with an inscription fform Galley in green ink, but nothing in the three months since. The Christmas card was postmarked from San Francisco, but Galley had an apartment in Pacific Point.

Mrs. Lawrence has a high opinion of her daughter, as well as a rigid sense of propriety,  and brushes off any of Archer’s suggestions despite some news that is hard to ignore. The mother has made several trips to the hospital in Pacific Point since Christmas. She tells Archer that Galley had been a special duty nurse for a man named Speed who was recovering from a gunshot wound to the stomach; the rumor was that Speed was a gangster.

Archer does not care for Mrs. Lawrence and is not interested in chasing after an adult woman who apparently doesn’t want to be in touch. He is ready to leave when Mrs. Lawrence shows him Galley’s nursing school graduation photo. Macdonald’s description is quoted bv nearly every commentator, and rightly so:

“Pretty was hardly the word. With her fierce curled lips, black eyes and clean angry bones she must have stood out in her graduating class like a chicken hawk in a flock of pullets.”

It’s nothing less than an unforgettable image, probably the most vivid one in the entire book.

Macdonald studied under W.H. Auden and wrote his doctoral dissertation on imagery in the poetry of Coleridge, so his appreciation of the potential of imagery goes deeper than the ability to call up a word. Macdonald is on his way to becoming a master of the literary image. In his later work his use of imagery is systematic and carefully crafted, and gives those works a resonance they would otherwise lack.

Archer does not reflect on his reasons, but once he has seen the picture he agrees to take the case.

The first chapter begins in a place of obsessive interest to Macdonald—in the past. One of his recurring themes is the impact of the past on the present, and here he makes the theme concrete in his choice of setting. This particular choice is ironic in the canon.  For Macdonald, the past is generally a terrible place. It is the source of most of the crimes in his mature novels. The present is frequently the place where the evils of the past are either revenged, punished, or perpetuated. Archer shares his creator’s impatience with people who live in the past, to the point where he almost did not take the case.

Archer’s first destination is a sensible one—the Pacific Point hospital where Galley worked. As he approaches the hospital he reflects for a moment in a way that hints at Macdonald’s potential:

“The wife of a client of mine had taken an overdose of sleeping pills in a Pacific Point hotel, so I knew where the hospital was . . . It was a rambling place of bilious yellow plaster, and the sight of it depressed me. My client’s wife had died of the sleeping pills. All that he really wanted was a divorce.”

Macdonald’s talent, of course, is to leave it alone. The incident is not mentioned again.

Archer locates a fellow nurse, Audrey Graham, her roommate, and learns the following: