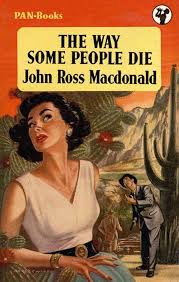 Picking up the Threads

Having investigated Galley’s place of work, Archer’s next step—her former apartment—is a sensible one. Archer meets the landlord, a thin, elderly man with a cough named Mr. Raisch. In The Novels of Ross Macdonald, Kreyling makes a case that the landlord is actually Dashiell Hammett in a cameo role, and Kreyling may be right.

Whether or not Raisch is a portrait of the real author, Archer learns several pieces of information:

With no leads on Galley, Archer shifts his attention to Tarantine on the theory that he will lead Archer to her.  It’s a good idea, at least in the absence of anything better.

Archer goes to the wrestling arena where Tarantine had worked for Herman Speed.  He learns:

In the absence of a lead on either Galley or Joe Tarantine, Archer goes to Plan C and visits Tarantine’s mother, who lives in a modest home.  When he goes to the house, Archer learns that Mrs. Tarantine has been called to the hospital because her son Mario, Joe Tarantine’s younger brother, was severely beaten the night before.

At the hospital, Archer meets the younger brother. Mario refuses to tell Archer who beat him or why, but he and Archer come to an arrangement. Mario will give Archer Joe’s LA address if Archer will tell Mario when Archer finds him.  Mario tells Archer that when Archer has news, he can find Mario on his boat, the Aztec Queen, in the harbor. (The boat will figure in the story later.)

From Pacific Point to LA

Archer slips into Joe Tarantine’s building and finds that Joe lives in apartment seven. The handwriting and the green ink on the mailbox card lead him to conclude that Galley prepared it. He also notes an address card for apartment eight in the name of Keith Dalling. Remember that name.

Archer doesn’t expect Tarantine to be there. Archer’s plan had been to search the place in the hope of finding a lead. When he arrives at the door he finds it unlocked. Stepping inside, he finds that the place has been thoroughly searched and all the contents destroyed. Before he can leave he is confronted by a very thin man with a gun. Archer comes up with a story that isn’t good enough for him to be let go, but good enough to keep him from being shot on the spot.

Meet Danny Dowser (Whether You Want to or Not)

The thin man (whose name will turn out to be Blaney) drives Archer to a luxurious hilltop home with tight security, including an armed guard at the gate. It is the home of Danny Dowser, the boss of the criminal organization looking for Joe Tarantine. When Dowser learns of Archer’s mission, he hires Archer to find Tarantine and Galley and bring them back. We learn that Galley was seen at a bar the night before in Palm Springs. He offers $5,000 for Tarantine and $1,000 for Galley. Dead or alive. Archer agrees on the theory that it is his best chance of getting out of the house alive, and takes a $500 retainer from Dowser.

This brief factual summary does not do justice to this chapter; the character of Dowser is convincingly drawn and the byplay leading up to the deal is classic noir patter. It would be very hard to put the book down at this point.