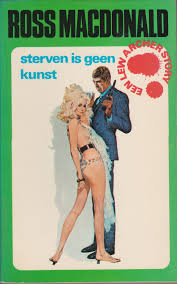 It’s Only March and Palm Springs is Too Hot

Chapter Eight is the beginning of the intense action. Up to now, Archer’s role has been somewhat passive, merely learning about events that have already happened. Starting here, the plot will be driven by actions in the present. And there will be a lot of them.

Archer’s lead, that Galley was seen in a bar the night before in Palm Springs, is thin. If the book was set in the present day, ridiculously so. But Palm Springs was a small enough place in 1950 that a detective could plausibly make the rounds of the bars with some hope of success, and after a number of tries, he succeeds. He observes that he wasted six dollars, which probably meant a dozen or so bars

The search is a minor point, but Macdonald handles this well. There was a time when Archer would have found the right bar on the first try, leaving us shaking our heads. Instead Macdonald gives us the search in one long paragraph, which also paints a picture of the night life of Palm Springs.

At the Lariat, a faux Western-themed bar, the bartender recognizes Galley from the picture Archer displays and says that she was there the night before.

Something odd happens next. The bartender is vague with Archer on anything further and excuses himself to make a phone call which he is careful not to let Archer overhear.  When the bartender returns from the call he claims he was calling his girlfriend. Archer does not believe him.  Archer decides to wait around and see what will happen next. Good call, Lew.

An extremely handsome and well-dressed man arrives, and after speaking briefly with the bartender, sits down at Archer’s table.  Dalling is a troubled and complex character, someone who is too handsome for his own good. He can’t find acting work because straight men are put off by his perfect looks and the gay men who make hiring decisions resent that he is sexually unavailable. At least that’s his story.  His problems run deeper than that; he has trouble establishing stable relationships with women, too. Macdonald is clearly gesturing at the myth of Adonis here, a man whose beauty literally becomes a curse.

Dalling likes to talk, too; something else Archer dislikes even though it helps him do his job. Listening to Dalling is like trying to drink from a fire hose. Archer learns:

The chapter ends with Dalling agreeing to drive Archer to his house where Tarantine and Galley are hiding.

The intricacies of the plot will not be apparent for some time, but let’s appreciate what Macdonald has accomplished. Archer has narrowed the search for Galley from a rumor that she was seen in a bar, to a specific house. But Archer is suspicious that it has been too easy, based on the call by the bartender and Dalling’s sudden appearance. Why does Archer agree to go? Because Dalling is presented as such a nonthreatening bundle of nerves that Archer is sure he can handle him. Which is true, as far as it goes.

Dalling drives Archer deep into the desert to an unfinished housing development called Oasis. The setting, one of the hundreds of Levittowns hastily thrown up after the war, is a small stroke of genius. Macdonald was known for his penetrating descriptions of life in southern California and he does not disappoint:

“We entered a maze of gravel roads crossing like city streets, but practically uninhabited. A handful of houses scattered here and there, street-lights on most of the corners, that was Oasis. It reminded me of an army camp I had seen at a starting point in the far west Pacific after its division had left for bloodier pastures.”