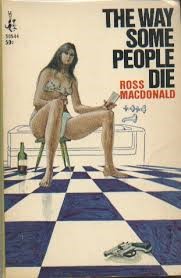 When Archer and Dalling arrive at the house, Dalling drives past and parks up the road. When Archer says that he thought they were going in together, Dalling begs off, pleading that since Tarantine knows him, Tarantine would be suspicious to see him because Tarantine had insisted on complete seclusion.

Archer approaches the house on foot, circling it once and noting Tarantine’s bronze Packard in the driveway.

He goes to the door and knocks. Galley Lawrence answers, a gun in her hand, and tells him to go away. When Archer announces who he is and his errand, she initially disbelieves him, but is eventually convinced. He tries to persuade her to leave but she refuses, citing her fear of her husband who she says is sleeping in the next room. She urges him to leave. As Archer turns to open the screen door, she warns. “Look out!” Archer is hit on the head and falls unconscious.

When Archer comes to, he is outside the house and his gun is missing. He is being tended to by a big, well-dressed middle-aged Midwestern woman who says she was driving by and saw him lying in the front yard. Her car is not in sight. She is something of a ditz and Archer does not need her distractions. But he needs to search the house and she isn’t leaving, so he goes in through the back and searches the house while she waits outside.  Galley and Tarantine are gone. Archer finds little of interest, although he notes a large deep-freezer in a corner of the garage. This will be important later. When Marjorie asks him his business there, he says he is renting the house; since he is able to identify Keith Dalling as the landlord, she accepts his explanation.

Since Dalling’s car is gone, as well as Tarantine’s, Archer is stranded till he can get his car in Palm Springs. Marjorie offers to drive him to her hotel, the Oasis Inn, where he can call a cab. On the way we learn a bit of her story:

The chapter ends with Archer briefly meeting Colonel Fellows when Marjorie drops him off at the hotel. Fellows is a powerfully-built, domineering man and Archer dislikes him immediately. Fortunately Fellows accepts Archer’s story that Archer’s car had broken down in the desert and Marjorie had simply been out for a drive.

We will be meeting Colonel and Marjorie Fellows again before the book is done.

Let’s Get Back to LA Where Things Are Simpler

Archer is missing his gun and was left high and dry by Dalling, so his next move, a visit to Dalling’s apartment to ask him what happened, seems like a good idea.

Archer arrives at Dalling’s apartment at the same time as the milkman and they exchange pleasantries. When Archer tries the door, it’s open. (One would think that Archer would be wary of entering unlocked apartments in this building, considering what happened to him when he entered Tarantine’s across the hall, but Archer presses on.)

At this moment, the close of Chapter Eleven, Macdonald has achieved a sweet spot in mystery writing. Archer knows enough to know that at least some of the characters are hiding something, but he’s not sure what—or which ones.
At this point, the only person who could tell Archer what was going on is dead.