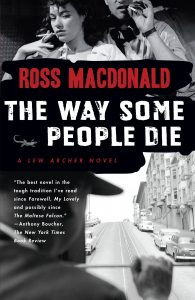 A Lull in the Action In Hollywood

Archer slips into the studio where Jane Hammond, Dalling’s ex-lover, works. She is a bright and highly successful executive. Archer asks her about Dalling without revealing that he is dead. When she was dating Dalling, Hammond had met Joe and Galley Tarantine and knew them as neighbors. She is distressed when she hears that Dalling may have taken up with Galley. Archer realizes Hammond still has feelings for the man.

Dalling had told Archer he had received some of his information about Tarantine from someone at the studio who did a true crime show, and Hammond directs him to Joshua Severn.

Macdonald is seldom self-referential in the Archer books, but he makes an exception here, and for a good reason. Severn trusts Archer because one of his neighbors in Santa Teresa is Miranda Sampson, whom Archer helped in The Moving Target.

Severn gives Archer the background on Dalling. Some of what he tells Archer is new, some is old, and all of it is sad.

Things Pick up in Santa Monica

Archer heads to the home of Mrs. Lawrence, thinking he has new information for her, but to his surprise Tarantine’s bronze Packard is in the driveway.

Lifestyles of Rich and Infamous Criminals

Based on Mrs. Lawrence’s description of a black car driven by a thin man, Archer is certain that it was Blaney, one of Dowser’s thugs, although why Galley would go willingly is a puzzlement. The only certainty is that she is in danger if she is with Dowser, so Dowser’s house is his next stop.

The action at Dowser’s house is long, complex, and soaked in atmosphere. It contains some of his best writing about the psychology of a crime boss. To summarize the action:

The chapter ends with Archer dozing off (after all, he did not sleep the previous night) to the sound of a car engine as Dowser and his men drive off, based on what they overheard.

My factual summary omits the flavor of the conversation between Galley and Archer—indeed, “conversation” is misleading. Archer gets to see Galley in action firsthand. Their interchange, with Galley lying on the bed the whole time, is fraught with sexuality even though nothing happens.