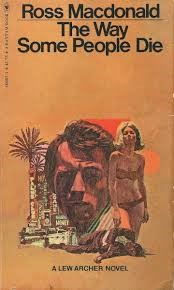 The Search Continues—Just In Another Direction

At the start of Chapter 16, Archer awakens, sleeping next to Galley. Dowser and his gang return. Galley is taken home to her mother’s by Blaney. Archer is released from the bedroom but not allowed to leave. While Archer is eating, Dowser muses about his life in the rackets. Time must elapse to allow Blaney to drive Galley to Santa Monica. When Blaney returns, he reports that he couldn’t deliver Galley to her door because a police cruiser was parked outside.

When Archer tells Dowser that a friend of Galley’s, Keith Dalling, had been murdered and that the police are probably questioning her about that, Dowser is uninterested.

Archer lets himself out.

Back to Pacific Point Hospital

This is his third time at the hospital in as many days, and one of his more fruitless trips. Intending to see Mario Tarantine, Joe’s younger brother, he learns that Mario left against doctor’s orders.

Archer goes to his mother’s house and finds Mario, still recovering but glad to be home. Mario is upset when Archer tells him that Joe was dropped off at the yacht basin early that morning. Joe has a set of keys for Mario’s boat, the Aztec Queen. Mario asks Archer to drive him to the docks. When they arrive, Mario’s fears are realized—the boat is gone.

It goes rapidly from bad to worse.

The harbormaster informs them that the Coast Guard has called in that a boat, presumably the Aztec Queen, has gone ashore on the rocks nine miles down the coast. They drive down to look. Mario, of course, is furious. He invested his entire savings in the boat and it is not insured. He displays a set of brass knuckles and vows to use them on the three men who beat him up several days previously.

His threats are interrupted when they see the boat breaking up on the rocks below.

When the Coast Guard starts questioning Mario, he becomes evasive. He suspects that Joe may have wrecked the boat to cover his tracks and fled to Mexico in the hopes that people would think he had drowned. As angry as he is at his brother, family loyalty prevails.

The sheriff questions Mario and tells him that a fisherman saw two men go out to the Aztec Queen in the predawn darkness. The fact that two men were seen rather than one baffles Archer as well as Mario, but Mario admits nothing.

The Attractions of Pacific Point

While they are driving past the wrestling arena, Mario sees one of the men who attacked him and goes after him. Archer breaks up the fight and takes away Mario’s brass knuckles. In the course of wrestling Mario back to the car, a young girl approaches Mario and begs him for heroin.

After Archer gets Mario home, he returns to the arena. An interlude of five pages follows where Macdonald describes the false pageantry of professional wresting in a manner that mixes humor and sharp observation.

After the match is over, Archer spots the young girl who wanted a fix, on the arm of a much older man. Archer follows the pair to a run-down motel. No explanation is given why Archer is interested and it turns out to be a very lucky hunch.

The girl is indeed acting as a prostitute. She and the young desk clerk are running a badger game. Archer watches while they shake down a hapless conventioneer from Oregon for all his ready cash, on the threat of arresting him for prostitution and attempted statutory rape.

While the desk clerk is downstairs busy relieving the conventioneer of his money, Archer confronts the girl, whose name is Ruth. She is an addict and is in poor shape, having gone three days without a fix since Tarantine disappeared.

Archer questions her about her life and how she came to her present situation. (We learn more about her background than we ever do about Galley Lawrence.) Ruth talks wildly about her childhood and about how, the previous evening, she had been on the shore and seen a man come out of the sea. Although it was dark, she is certain of what she saw, and certain that it was not Joe Tarantine. (She should know, since Joe was her supplier.) She clearly saw the man cross the beach, carrying a package, and get into a car and drive away. Ruth also tells Archer that a former associate of Speed, nicknamed Mosquito, is selling heroin in San Francisco.

Chapter 20 begins with the return of the crooked desk clerk Ronnie, Ruth’s boyfriend and the one who introduced her to heroin. Thanks a heap, Ronnie.  Archer explains to Ronnie in a way that Ronnie understands that he will be asking the questions and Ronnie will be giving the answers.

Archer’s suspicion is correct, that Ronnie is—or rather was–part of Speed’s heroin ring. Archer threatens to turn him in for extortion unless Ronnie tells him about Speed.

Ronnie fills in some important details: