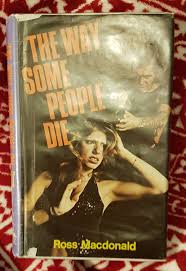 The Action Needs a Couple of Chapters to Digest

After Archer is done with Ronnie, he reflects:

“The pattern was starting to form on the map at the back of my mind. It was an abstract pattern, a high thin triangle drawn in red. Its base was the short straight line between Palm Springs and Pacific Point. Its apex was San Francisco. Another, shadowy triangle on the same base pointed its apex at Reno. But when I tried to merge the two into a single picture, the entire pattern blurred.”

Archer goes to the courthouse and meets Galley, who has just finished answering questions about Joe Tarantine and the Aztec Queen. Archer agrees to drive her to her mother’s house in Santa Monica. On the way she admits:

In the next chapter, 25, Archer arrives home in LA to find two officers waiting to question him about Dalling’s killing, based on:

Archer banters with the police at length in Macdonald’s best imitation of a Sam Spade patter. Unfortunately his best is not very good. The weakest element of Macdonald’s early writing was his attempts at sophomoric wit, and it is on full display here. Fortunately he is learning his lesson.

Back to the Oasis

When Archer checks his messages, he learns that Marjorie Fellows has been trying to reach him. She persuades him to drive to the Oasis Hotel.

Marjorie has a lot on her mind:

Archer is sympathetic, but he wants to get to the bottom of why Marjorie was parked near Dalling’s house that night, in the middle of nowhere. She admits that she had discovered that her husband had been going to Dalling’s house and decided to see what he was doing there. And then she drops the bombshells:

Archer explains to her that “Colonel Henry Fellows” is really Herman Speed and what that means. She hires him to recover the $30,000 for a 15% fee.

I am going to briefly summarize some well-written and suspenseful scenes. My rapid treatment is no reflection on their quality—only that they lend themselves to quick review and that I am nearly 72 years old.

Armed with contact information from Ronnie, Archer goes to San Francisco in search of Mosquito, the heroin dealer. Ruth, the teenaged prostitute, is there, too.  Archer forces Mosquito to take him to Speed’s hideout, a cabin on Half Moon Bay. Archer overpowers Speed and takes the heroin. He goes back to Mosquito’s room and gets Ruth, who tells her story to the police about seeing a man come out of the sea. Archer then arranges for her to be committed for heroin withdrawal.

The chapter ends with Archer announcing to the police that he has $100,000 worth of heroin in the trunk of his car.

What Goes Around Comes Around

Archer drives to Dowser’s. He had called previously and told Dowser he had something Dowser wanted, but didn’t want to discuss it on the phone. Now Archer reveals what Dowser suspected, that he has the heroin. They haggle for some time and finally agree on a price, $15,000. Then Dowser accuses him of killing Mosquito (his body was found on the road near Speed’s cabin, presumably the work of Speed). The price of Dowser’s silence, conveniently, is $15,000. Archer is angry but with all of Dowser’s men there, he has no choice but to leave empty-handed.

Archer drives out of sight of the house, where several police cruisers are waiting. He gives them the nod to break in and arrest Dowser for drug possession. And to keep the story on track, they tell Archer that Tarantine’s body has washed ashore.