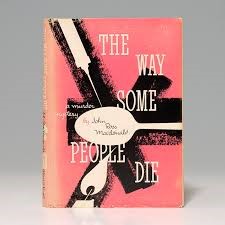 “The dead man lay under the light, battered and befouled and awesome.”

I wish I could write half that well.

Joe Tarantine’s body is brought in for an autopsy. Initially the coroner thinks it’s a straightforward drowning but Archer needles him into doing a thorough examination. Exactly what Archer is getting at is not clear. A reader may notice that the book has more than forty pages to go and may wonder what else there is to say. It seems that all the criminals are either dead or in jail.

There is plenty to say, despite the grousing of the coroner that Archer is “looking for an angle, trying to find a twist in a perfectly straight case.”

While waiting for the autopsy results, Archer goes to a restaurant for dinner and Galley joins him. She has just watched part of the autopsy and says she could use a drink.

Archer, who has seen Joe Tarantine’s body, asks Galley what clothes Joe had been wearing during the days the two of them were together in Oasis. He establishes that Joe was found dead in the same clothes Mario had seen him wearing the Friday night before he died. He wonders out loud why Joe hadn’t changed clothes in four days. Galley has a ready explanation, that she has already mentioned, that Joe was agitated and restless the whole time and was not himself.

Archer probes deeper and asks Galley why she left out of her account the fact that Herman Speed had visited the Dalling house to pick up the heroin. Archer knows about the visit from Marjorie Fellows and he knows that Galley would have recognized him. Galley sidesteps the question by saying Joe had sent her away from the house for a few hours that night, so Archer is back where he started.

Even if Archer isn’t making any progress with Galley, the reader is starting to catch on. The pattern is still blurry, like Archer’s imaginary triangles diagramming the case, but it’s coming into focus.

I Get by With a Little Help From My Coroner

Archer stops by the autopsy room just as the coroner is finishing. The coroner’s information:

Archer goes looking for the police to discuss the findings and then goes back to the restaurant where he left Galley.

The waiter tells Archer that Galley left with Mario Tarantine.

Macdonald avoids reliance on forensic evidence. He hews very much to the line of the traditional noir private eye story. Macdonald never forgot that the point of a private eye story is to solve the case without an army of evidence technicians and specialists. If the reader wants that kind of a story there are a thousand writers out there pounding out police procedurals. Macdonald tells stories where his detective lives by his wits.

This is one of the few books in the canon where the solution depends (at least in part) on technical information.

Note how Macdonald minimizes it as much as possible while still giving Archer something to go on:

Macdonald always knew better than to blur the line between hardboiled detective story and police procedural. Forensic evidence has its place, both in the real world and in fiction, but deploying the technical resources of a police department destroys the level playing field of the private eye story.

Now that Archer knows that Galley and Mario are together, things are going to move very quickly.